The End Of An Era

And so we reach the belated, belabored end of our Harry Potter marathon. In this review, I shall package the Yates-directed Deathly Hallows Part 1 and Part 2 as a single film, much as the studio should have done. I will split up my analysis and scores because they are, ultimately, very different films, but neither deserves something as grandiose as a full-length piece.


[EN: The grand conclusion to this marathon came much later than I anticipated, so now instead of a finale for the world of Harry Potter, let’s consider this review a warm-up for the impending release of Fantastic Beasts and Where to Find Them and its battalion of premature sequels.]

Harry Potter and the Deathly Hallows, in case you have been frozen in carbonite for the last 20 years and missed this phenomenon completely, tells the story of seventeen-year-old wizard Harry Potter (Daniel Radcliffe). Harry embarks upon an epic camping trip with his friends Ron (Rupert Grint) and Hermione (Emma Watson), attempting to hunt down and destroy the remaining Horcurxes of Lord Voldemort (Ralph Fiennes), the mystical objects that contain his shattered soul. Once they’re destroyed, he will no longer be immortal and he can be defeated. This all culminates in a massive battle at Hogwarts, with the forces of Good and Evil fighting for the fate of the wizarding world. 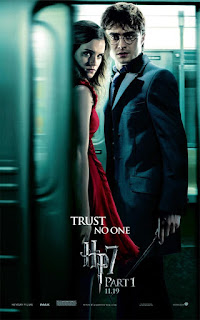 You know that cool part of the plot summary about massive battles and good struggling to triumph over evil? That’s not in this one. Deathly Hallows Part 1 devotes the bulk of its time to that most portentous of occasions: wizard camping. While the subject matter is hardly enthralling, promising director David Yates (who directed the two previous, increasingly delightful, films, the best two in the franchise up to that point) does next to nothing with it, and thus Deathly Hallows Part 1 sinks back into the dull muck of the Harry Potter rank and file.

Other than a mysterious penchant for capturing its leading men shirtless on film (science will never satisfactorily explain preteen girls’ illicit fascination with scrawny British kids), Deathly Hallows’ aesthetic has very little going for it. It’s drab and unremarkable, and its two best sequences are the ones that seem to actively yearn to be any other movie than the one it is. The first is an animated sequence that illustrates the titular folk tale (yes, the title references a made-up folk tale, and would you be surprised if I told you the plot was waaaay too bogged down with explorations of wizarding mythology?). The second is a sequence featuring a magical snake that feels like it was transplanted directly from some halfway decent B-horror film. These peculiar flights of fancy briefly enliven the film before it drops once more into its monotonous slump.

Don’t get me wrong, it’s not particularly dreadful, and it’s certainly not as wooden and creaky as one Mr. Columbus’ contributions to the franchise. It’s just sort of there. Occasionally a well-choreographed action scene will rear its head, but it’s largely just a peaky mash of conversations in tents, strained teen melodrama, and befuddlingly complex world-building. And even with the remarkably disproportionate run time it’s given, it manages to bungle simple things like actually introducing characters who only readers of the books will fully understand. It’s a lackluster, inauspicious beginning to an end. 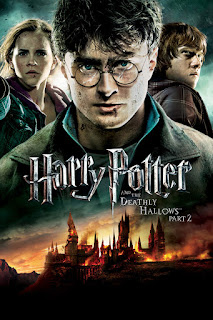 I always remember Deathly Hallows Part 2 as being the one where things actually happen. Now that I’m coming to it without the breathless anticipation of a lifetime of Harry Potter fandom, I’ve realized that, while this is accurate, the massive swaths of plot regurgitated by the film really don’t hold much meaning.

Deathly Hallows was already a weaker entry in the book series, bogged down by appendixfuls of lore, side quests, and revelations about the history of its characters. It’s J. K. Rowling’s Silmarillion, not necessarily the climactic showdown we’d been waiting for, at least until the very end. Where the film goes wrong is in following that narrative to the letter. If they had been forced to condense this material into just one movie, this could have been avoided, but huge chunks of Part 2 are devoted to endless bone-dry exposition.

The pacing is shot to tatters, and such a large part of the inflated run time is devoted to exactly recreating the worst parts of the book that Yates can barely squeeze in the massive roster of characters who live and die in the climactic Battle of Hogwarts. It sucks all emotion from the film like a Dementor’s Kiss, asking us to weep over the death of characters who only appear for seconds onscreen before their lifeless corpses are draped dramatically across the frame.

Of course, die-hard fans know exactly who these characters are and how they got here, but taken as a piece of cinema it’s nigh-on incomprehensible. The bulk of the film is taken up with a massive battle that is admittedly a worthy spectacle of flash-bang special effects and indiscriminate mayhem, but the character work for everyone but Harry is so disjointed that not a single death holds the remotest bit of impact and a series of action movie quips fall to the floor with resounding thuds.

The dourness and arch mythmaking of Deathly Hallows completely leaches out the subtle imagery and beauty Yates brought to Half-Blood Prince, leaving us with a mess of desaturated, cluttered visuals that rival only Chris Columbus’s as the worst in the series.

Deathly Hallows Part 2 is a whirlwind roller coaster of a film that keeps the same, fantasy movie thrills coming, but it’s yet another bungle in a beloved film franchise that I’ve come to realize only has two or three genuinely great movies to its name.