A set of mini-reviews from movie explored in month 3 of the Scream 101 podcast, all 70’s proto-slashers.

The Town That Dreaded Sundown (For the Scream 101 episode about this film, click here.) 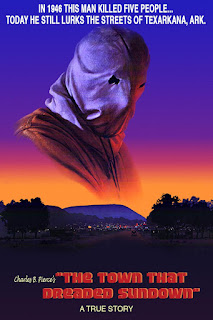 A hooded maniac known as the Phantom Killer murders couples in various lovers’ lanes of Texarkana while a Texas Ranger and an assortment of kooky cops attempt to track him down.

I was excited to check out The Town That Dreaded Sundown, if only because it was name-dropped in Scream. I should learn to have stricter criteria for my movie-watching, because this inept slasher tested my endurance even more than the previous week’s late 70’s trash fire When a Stranger Calls. Although, I will give it one thing: Much like Golden Era slasher A Day of Judgment, The Town That Dreaded Sundown’s best quality is that it’s a weirdly convincing period piece, this time set in the post-World War II 1940’s.

Other than that, TTTDS (the weirdest acronym I’ve ever had to type) is a plain-jane riff on The Texas Chain Saw Massacre. A killer strikes in a rural Southern town, accompanied by foreboding narration that gravely insists this was all based on a true story (although John Larroquette’s gravelly Chain Saw intro easily outpaces Vern Stierman’s jaunty monologue, which carries through the entire film and makes the whole affair sound like a documentary you’d screen in a second grade classroom). There’s also a severe hesitance toward showing any onscreen gore.

However, where Tobe Hooper’s kinetic, gritty direction gave Chain Saw a brutal tang in spite of its chaste gore, The Town That Dreaded Sundown got Charles B. Pierce, an inept at best amateur who was more keen to capture B-roll of his beloved town that actually tell a satisfying story. In his hands, the tone flies wildly out of control, tilting into slapstick comedy both unintentionally (the Phantom Killer tiptoes and pratfalls his way through his own murder scenes like he just stepped out of a Pink Panther movie) and with deadly seriousness.

You see, The Town That Dreaded Sundown has the yuk-yukkiest goofy cops this side of The Last House on the Left. I’m talking characters that would be shunned in the cop movie cafeteria by folks from Police Academy or Keystone Cops. Their staggering ineptitude weighs heavily on this movie, especially the drag-dressing, car-key-forgetting, crash-car-into-the-swamping Sparkplug, played with tooth-gnashing, Barney-Fife-ish glee by Pierce himself.

These characters, who we’re forced to spend the entire movie with, tear the atmosphere to shreds. The killer’s vague positive qualities (i.e. the creepy way his mask moves with every breath he takes, at one point he murders a girl with a trombone, etc.) are hardly strong enough to pull this wacky, boring slasher experiment back from the brink.

Alice, Sweet Alice (For the Scream 101 episode about this film, click here.) 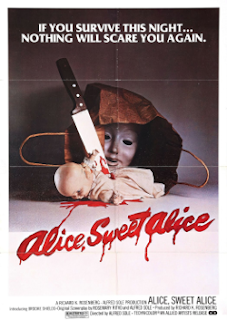 After her sister is brutally murdered at her first communion, Alice is blamed for it and the killings that follow.

Alice, Sweet Alice is definitely an oddity. Not quite a drama, not quite a horror film, and not quite a slasher, it’s sort of a primordial ooze of mood and sleaze that made it essential viewing for this month. It’s basically a 100-minute riff on Catholic iconography and ideology, twisting holy imagery into something devilish and unclean. Considering I’m about as far from Catholic as it’s possible to be without being actively Satanic, this didn’t really do much for me. But I nevertheless respect its gusto.

Alice, Sweet Alice’s focus on image and mood is unfortunate, considering that its director isn’t especially talented, but there are some prop designs that just plain work. The mask worn by the killer is a particular triumph, an opaque plastic, face-obliterating monstrosity with garish make-up that maps perfectly onto the eyes to create a chilling expressiveness despite its blank features. There’s also a three-headed doll that’s straight-up nightmare fuel, though it’s easy enough to make a doll creepy.

And the plot itself isn’t all bad. The reveal of the killer only ever feels arbitrary (especially considering that the plot unspools for a good 20 minutes or so after that no-so-pivotal moment), and the movie doesn’t provide enough red herrings to make it a truly satisfying mystery (we’re meant to believe Alice is the killer, but it’s so transparently desperate to convince us of this that it’s obvious she’s not). But many early sequences feel like an Italian melodrama, reveling in tear-stained close-ups of women on the brink, and you won’t catch me complaining about over-the-top drama. Hell, I was a fan of Empire.

That’s really about it for Alice, Sweet Alice. The gore is slight, although their retractable knife provides some stunning shots, and there’s plenty of Tobe Hooper-esque sleaze filling in the gaps of the story. I’m looking at you, Mr. Alphonso, the cat-owning perverted landlord who is by far the most interesting character in the entire movie. Alice, Sweet Alice isn’t the best proto-slasher, but it was enough to renew my faith in the form after the ignominious one-two punch of When a Stranger Calls and The Town That Dreaded Sundown.

Tourist Trap (For the Scream 101 episode about this film, click here.) 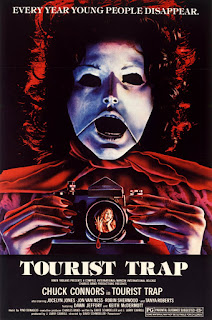 Five young vacationers get a flat tire and find themselves trapped in a creepy roadside museum stocked with evil mannequins and a telekinetic killer.

Have you ever wondered what would happen if the kids from The Texas Chain Saw Massacre made a pit stop at the Psycho motel, only instead of Norman Bates behind the counter, it was some sort of twisted Pinocchio man? If you aren’t at least a little curious, then maybe Tourist Trap isn’t for you.

However, I’m a devotee of weird cinema, and if there’s one thing that Tourist Trap has in spades, it’s weirdness. It’s not so much a functional narrative, but its deranged nightmare logic is captivating. The use of mannequins as a source of terror is a logical step forward from the classic trope of creepy dolls (one that would likewise be put to good use in the next year’s Maniac), but Tourist Trap does more than just a lazily effective gimmick. These mannequins are a buck wild special effects spectacle that more than makes up for the 70’s-esque lack of gore in the kill scenes.

Tourist Trap throws all logic out the window in favor of pure, off-kilter energy, having its mannequins twist their heads to reveal gaping mouths, motionlessly vocalize in a screaming chorus, and occasionally spring to life for a spot of soup and crackers. It’s unpredictable, it’s incomprehensible, and a truly pure experience unlike any other, all underscored by the unadulterated lunacy of Pino Donaggio’s score, which seems to have been written for a children’s cartoon and is spliced in here at the most inopportune moments.

If you’re not into films that have the singular purpose of knocking you on your butt with pure strangeness, then don’t seek out Tourist Trap, because it doesn’t have much else to offer. The characters are thinner than Donald Trump’s skin, the Final Girl is kind of an asshole, and the killer has an incredible mask but ruins it by flapping his gums a bit too much. There’s a slight feint toward the political potency of Texas Chain Saw with a dropped line about the highway driving away business, but despite having plenty of time to do so in the interminable third act, it never goes anywhere.

But that mannequin material really is some great stuff. And Tourist Trap knows it, hauling them out as often as the meager budget can allow. Which is quite a lot. Turns out mannequins ain’t expensive. Where it’s not a great movie, it’s a delightfully twisted experience, and I’m glad I took the time to sit through it.