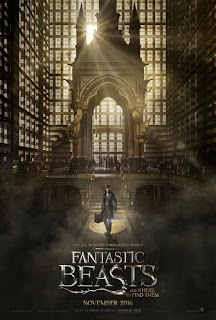 Of course the Harry Potter franchise wasn’t dead. Did you think J. K. Rowling would abandon her money geyser to keep writing Robert Galbraith mysteries in quiet cafés forever? I’m just glad the franchise is actually moving in a different direction instead of showing yet another wave of students carve their way through a mountain of Hogwarts homework assignments (The Cursed Child was quite enough, thank you).

I was apprehensive when I learned that the new film would in some way be based on the Hogwarts textbook Fantastic Beasts and Where to Find Them, but as a literate human being in my age bracket, I was obligated to check it out. 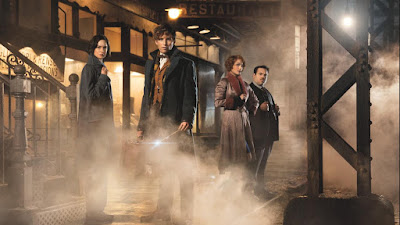 At least she didn’t pick Quidditch Through the Ages, thank Merlin.

In Fantastic Beasts and Where to Find Them, magical creature researcher and advocate Newt Scamander (Eddie Redmayne) arrives in New York City in 1926, carrying a case that contains all the creatures he has been studying (it’s much bigger on the inside). After a mix-up at the bank, Muggle factory worker Kowalski (Dan Fogler) accidentally sets loose a couple of the creatures and gets tangled up in a frantic chase to recapture them with Newt and ex-Auror Tina (Katherine Waterston, and if you don’t know what an Auror is, good luck).

Meanwhile, am mysterious dark force has been wreaking havoc upon the city, causing local No-Maj’s (as the Americans call Muggles – get it?  “no magic” – because apparently Rowling forgot how to name things) to become suspicious about magical activity. With the dark wizard Grindelwald still at large, the Magical Congress of the United States of America (which, when the acronym is pronounced, only sounds like “Yakuza” to my delight) feat that this new Salem movement may provoke an all-out war. President Seraphina Piquery (Carmen Ejogo) and Director of Magical Security Percival Graves (Colin Farrell) suspect that one of Scamander’s beasts is responsible, despite his fervent assertions that they’re harmless. So, he’s also tasked to figure out what actually IS causing this mayhem while he avoids the long arm of the magical law. 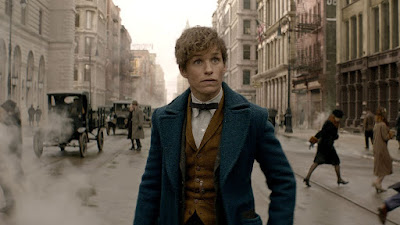 In fact, Fantastic Beasts is even better than just a change of pace. It’s a light, fun fantasy adventure that erases the dour tone of the last few Harry Potter films, returning us to a world of whimsy and wonder… Mostly. The central conflict of this film, which is thankfully treated more like a B-plot, is prone to rather sudden shifts in tone that don’t suit the movie one whit. One minute we’re pirouetting in a sanctuary for teleporting ducks, and the next Ezra Miller shows up playing a terminally maudlin child that looks like he stepped off the set of a Tim Burton film, but acts like he was written by Charles Dickens on a bad day.

These sequences range from the bizarrely overwrought (a little girl plays hopscotch while chanting a rhyme about witch murder) to the actively bad (there’s a bit of business about a presidential election that seems to be setting up a despotic villain – topical – but randomly vanishes halfway through), so the marriage of these two tones is fraught with tension. These sections are also marked by the absolute worst of James Newton Howard’s generic score, which quotes Saw in the weirdest way possible. Again, luckily the move seems to recognize that this portion of the plot is junk, so it shoves it offscreen as roughly and as often as possible.

Pay no attention to the subplot behind the curtain.

But if you excise that chunk of the movie from your brain, the rest is –in a word – fantastic. Mostly. OK, it’s not perfect, but it’s a breezy bit of popcorn fun that is much needed in this horrifying time we’re living in.

The creature effects range from solid (an instantly plushy-able niffler) to iffy (they never have been able to get house elves entirely right), but they’re all triumphs of colorful, fantastical design. And, amusingly, the single worst CGI creature in the whole thing is a lion. Like, just a straight-up, real-ass lion fro the Central Park Zoo, which really puts everything else in perspective. Where the effects really shine is in creating a living, breathing 1920’s New York City that serves as the perfect nostalgic backdrop for the overflowing magical mayhem of this timeless tale.

It’s thanks to this setting that Fantastic Beasts thrives. Placing a grand tale of wizardry and mystical creatures smack dab in the middle of one of the busiest cities in the world is an ingenious juxtaposition that makes the film pulse with lively, jaunty energy. Although some of the humor tips toward the juvenile (Oh my, a man couldn’t possibly deal with talking about tampons! Gee whiz, that dude is much too fat to fit into a suitcase designed to transport enormous magical creatures! Ho ho! What fun!), it sparkles with a joie de vivre that can’t be denied. 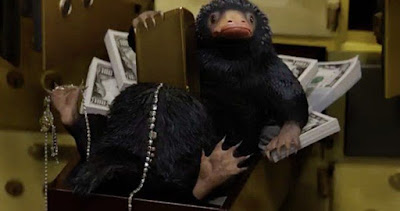 And despite being a transparent marketing plot, there’s not a snowball’s chance in Hell that you won’t exit the theater loving the niffler.

But I’ve been neglecting the human element here, which is uncommonly strong. Redmayne is an excellent addition to Rowling’s wizarding world, providing an exquisitely strange energy to his role. But the real standout here is relative unknown Dan Fogler, whose Muggle bravado (I refuse to call him a No-Maj, because apparently this is how little the Brits think of us) is aced with a sublime cluelessness and whip-smart comic timing. I also couldn’t leave out the Marilyn Monroe-esque beauty Queenie (Alison Sudol), who hides some sharp anarchistic edges beneath her airy façade. Katherine Waterston is the least of our heroes because her role is a bit of a cypher, but she grounds the silliness of her motley crew. It’s a perfect mixture of the funny and the unreal.

So Fantastic Beasts and Where to Find Them has its fair share of flaws (not the least of which is how it makes my fingers cramp up whenever I have to type that full title), but it’s a return to form for spotty Potter director David Yates. It’s not quite at the level of his magnum opus The Half-Blood Prince, but that five-year break certainly put a pep in his step. My advice? Go see Fantastic Beasts. Wipe your slate clean of expectations, and have yourself a plain old-fashioned good time.