Popcorn Kernels: Only 90's Kids Will Get It 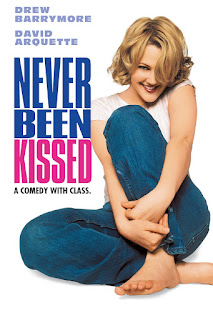 A reporter goes undercover at the local high school for a story, but gets distracted by her attempt to reset her loser reputation and a budding romance with a handsome teacher.

Never Been Kissed is one of those movies that rom-com fans should never ever revisit. Not because it’s terrible, but because in retrospect it’s deeply inappropriate. A lot of rom-coms glorify behaviors like stalking, going after taken men, or rushing into marriages, but this is the only one I’m aware of where the central relationship is between a teacher and someone who he believes to be 17. And the other spoke on that love triangle is between the undercover reporter and somebody who’s actually 17. This movie shouldn’t be allowed within 50 feet of a high schooler’s collection.

If you try to ignore that by focusing on the sparsely dotted line of morality where you know that she secretly is of age, the rest of the movie still isn’t a terrific entry in the genre, but it’s pleasant enough. It’s definitely a hang-out movie, allowing charming stars Drew Barrymore, David Arquette (who I will always love, so sue me), Molly Shannon (in an excellent and rare role as a woman who’s actually on top of things – especially in bed), John C. Reilly, and Octavia Spencer (who is still paying her dues by playing the role she would play in every movie for a decade and change: the coworker who goes “Mmhmm!”) to sit back, relax, and have fun, without getting tripped up by anything as gauche as a plot.

The first act takes up about half the film, and if we didn’t already know the title, we wouldn’t know Barrymore’s character was a kiss virgin until about ten minutes before the closing credits. Although we definitely could have deduced as much, thanks to their preposterously extreme efforts to plausibly nerdify the charming young actress, which include her clomping around with her back hunched like a hungover Igor, wearing what can only be described as knitted maternity clothes, and sporting lips more chapped than Blake Lively’s at the end of The Shallows.

The movie is actually really careless with its best element, that of an adult attempting to rewrite her high school life and learning how much things have changed. It could have been 21 Jump Street, but its utter lack of focus makes the plot a sub-Cinderella Story wash. While the humor is decent (my favorite jokes in the film are a handful of absurdist visual gags that slam into the film completely out of nowhere), the structure is both directionless (the third act monologue – as played by her story in the newspaper – is equally as confused about what it’s supposed to be saying as we are. At any rate, it’s certainly too vague and diary-ish to actually be a good article in a real paper) and deeply stupid (Love Interest is actively upset that she’s not 17, so she makes a grand romantic gesture… forcing him to kiss her in front of a stadium full of people like a goddamn psychopath). Not to mention icky. While charming, Never Been Kissed is a deeply flawed movie that you won’t want to take home to mom. 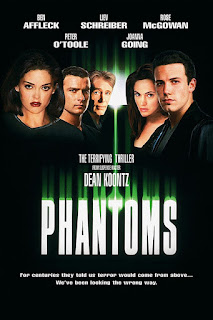 A small-town doctor and her little sister arrive home and discover that half the townspeople are dead and the rest are missing. They are haunted by strange visions as they team up with the sheriff and his team to try and survive the night.

With a movie that came out two years after Scream that stars Rose McGowan and other teen favorites and boasts one of those lazy group photo posters, you’d think you know exactly what you’re getting. You’d be very wrong, because Phantoms ain’t no dime-a-dozen quippy slasher. This is an adaptation of a Dean Koontz novel, one of his most underrated tomes of the macabre. Of course, being a Dean Koontz movie comes with its own set of rules. Mainly, it sucks.

Stephen King must have sold his soul to some Lovecraftian film gods, because it’s utter hogwash that he’s given us Carrie, The Shining, Misery, and so on, and the best we get from Koontz is Watchers 3.

So yes, despite being adapted from one of my favorite novels, Phantoms is a cinematic compost heap. Setting aside what they changed from the source material (everything) and how that affected the story (poorly), approaching Phantoms as a film taken on its own is still a miserable, pointless endeavor. Trying to find something good to say about it is like trying to decide which fart smells the best. At the end of the day, you’re still smelling farts.

A bizarre attempt to remake The Thing on a Ghost Cat budget, Phantoms is an effects-driven horror film without the effects. It finds so many ways around showing any sort of gore or grotesquerie (including, but not limited to, POV shots and those obnoxious film negative flash cuts that we all the rage in the 90’s) that it’s only when the characters start arbitrarily spouting F-words in the third act that you realize it wasn’t cut for TV.

And it’s not like the people on set can't act (hell, Peter O’Toole is in the bloody thing). It’s just that they’re not acting. A babyfaced Ben Affleck flounders in a tough-guy sheriff role that makes him look like a second grader playing dressup, Rose McGowan’s not asked to do anything other than be an asshole and stand in the corner, and Peter O’Toole is about fifty years past his prime. Their bored underreactions and the film’s careless editing mean that not a single shock gag lands.

When a lineup of cardboard characters is hastily shuffled through a randomly sawn-off handful of plot beats, it’s hard to get a foothold. The film sprints toward the finish line before you can even begin to care about what’s going on, despite the atmospheric eeriness of exactly two sequences.

To make a long, boring story short, Phantoms is an embarrassment to a subgenre that produced films like Valentine and Urban Legends: Bloody Mary. Steer clear of it, not that you’ll need to put much effort into that.