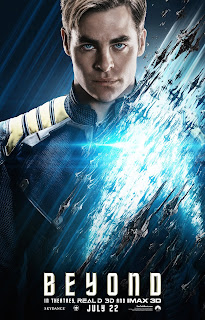 Forgive me reader, for I have sinned. I have never seen a single episode of any Star Trek series. Hardcore sci-fi fandom is a little above my pay grade. However, I have seen J. J. Abrams’ 2009 lens flare expo Star Trek, so I feel perfectly capable of reviewing Star Trek Beyond, the reason I’ve gathered you here today. However, I’m not certain Star Trek Beyond is capable of being reviewed, because it’s the most Movie movie I’ve ever encountered. 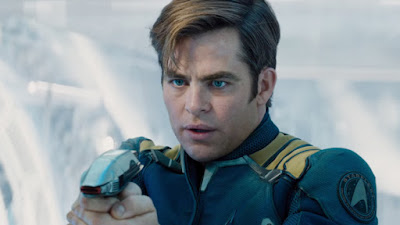 It might as well be called Captain Whiteguy and the MacGuffin Adventure.

Directed by Justin Lin of the Fast and/or Furious franchise, for the first time in this new continuity the screen is actually visible, but you kind of wish it wasn’t. Or at least, you don’t need it to be, because every beat is exactly as predictable and nonsensical as every other sci-fi/fantasy adventure in the past 40 years. Captain James T. Kirk (Chris Pine) is getting weary of space travel, probably because he still doesn’t have a  love interest, and this film is all about slam-jammin’ forced romances into every nook and cranny.

Guess how that goes. The USS Enterprise is dealt a devastating blow by the forces of Krall (Idris Elba) who desperately seeks the MacGuffin they have on the ship for no good reason. They crash land on an uncharted planet and must survive the wilderness, relocate the rest of their team, and stop Krall from wreaking wicked, MacGuffiny havoc on a nearby federation base, which the movie stops dead for five minutes to show us the majesty of, even though it looks almost exactly like an M.C. Escher version of that city from the beginning of Guardians of the Galaxy. 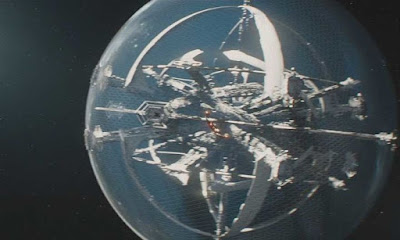 Zoe Saldana was probably having flashbacks.

The Star Trek franchise is finally free of its lens flare prison. Praise Roddenberry! But nature abhors a vacuum, and so does Hollywood. So they’ve replaced J. J. Abrams’ shiny crutch with a truly shocking profusion of camera spins. The frame rotates this way and that like the DP used a Lazy Susan instead of a tripod, even using spinning shots as reactions to other spinning shots. It’s like being strapped to a windmill and it’s massively unpleasant.

A frustrating aesthetic is a bad starting point when your movie is this numbingly generic, because once you break through that crust there’s nothing really worth digesting on the inside. It feels like a story written with a randomized cliché generator (which might be thanks to the dozen or so studios that collaborated on this film), mixing personal favorites like “they’ve been watching us this whole time,” the convenient injury that’s only debilitating when the plot needs drama, and the Big Evil Thing in the Sky over a City, mixed with some Abrams Star Trek standbys like people having long conversations while their ship is being actively destroyed, and ludicrous technobabble monologues split between a dozen people to keep things snappy. 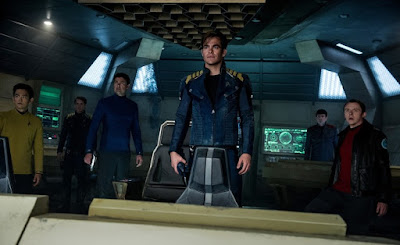 Unfortunately, Star Trek Beyond opens on one of its strongest sequence, an adventure-of-the-week scenario that depicts Captain Kirk doing his best Jason Bateman impression in a silly popcorn movie diplomatic mission. From here, you would assume that the movie will be full of frothy summer fun, but it quickly devolves once more into dour, self-serious didacticism. That unabashed goofiness returns in spurts, especially in the interplay between Spock and Bones (the only time Quinto is given anything to do other than being the film’s conduit for mourning Leonard Nimoy), but for the most part Beyond is just one more plodding downer in a summer heavy with them.

It finally loosens up for a pair of decent action sequences in the preamble to the finale, and the heavy-handed climax does do some fun (if geographically vexing) things with antigravity, but it’s too little too late for a film that already had a slippery grasp on merely being middling

It’s a thoroughly watchable CGI-laden blockbuster for the majority of its runtime, especially thanks to a charming new character played by Kingsman’s Sofia Boutella, but when Star Trek Beyond is bad, it’s atrocious. The dialogue is so wooden I’m surprised the actors’ mouths didn’t get splinters, and certain scenes are so overloaded with crashing, screeching sound effects that the words are plumb inaudible. But when you’re watching the crew tear through a bundle of half-assed video game levels, I suppose the script isn’t all that necessary.

Star Trek beyond may have shucked off the visually despicable deficiencies of the tyrant J. J. Abrams, but the franchise is left a shallow husk of itself. I suppose it’s too late to warn you away, but man what a miserable move year this is shaping up to be.