In our continuing quest to watch every Pedro Almodóvar movie ever made, we have spanned his filmography from his very first movie to his most personal, autobiographical work, to his most recent attempt to return to his roots, all of which are getting mini-reviews right here. 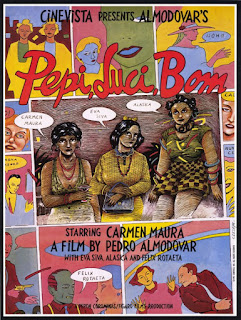 A fast-talking heiress, a submissive housewife, and a 16-year-old punk rocker come together to explore their desires, their individuality, and the anarchist lifestyle of Spain’s Movida movement.

So, it has come to this. When I found the disc for Pepi, Luci, Bom and Other Girls on the Heap hidden in my school library’s treasure vault, I knew I had to leap on the opportunity to rent it. It’s hard to find (in fact, I had to crack through a Region 2, subtitle-less DVD to get to this screening like I was in a National Treasure movie). But I knew there was a reason it’s hard to find. As Pedro Almodóvar’s first movie, it has certain… challenges. By his own admission, the continuity is a complex puzzle with pieces missing. And he never had a lick of film school, so he was flying by the seat of his pants. However, this was also going to be a treat. I was going t see what an Almodóvar movie looked like when stripped of its directorial polish. What raw core components does he possess?

Well, the first thing I’ll say is that Pepi, Luci, Bom is unmistakably an Almodóvar movie. It has the circuitous storytelling, the twisted 50’s pop art style, and the unbreakable bedrock of humor. Hell, it has Carmen Maura, his preferred lead actress for almost a decade. But this Almodóvar isn’t the quietly kinky artiste we’ve come to know and love. This is a young Almodóvar bristling with contempt for post-Franco Spanish culture, and he has made a messy loud, delirious, radically queer anarchist text. It’s unprofessional, but it makes up for that in volume, like all the best punk rock idols.

The key here is Almodóvar’s casual presentation. He’s not trying to shock you, he’s just showing how these people’s lives are different from ours in shocking ways. It’s a wonderfully out-there sexual and political statement.

Now, I’ll be frank. This movie’s narrative is a shattered disaster. There is such irreparable damage to its hull that Almodóvar must resort to title cards to make any semblance of sense. Continuity is an idea this movie has heard of, but long ago or maybe in a dream. The movie slams the brakes for several full musical performances from a punk band. But it also numbers among his funniest works, building big, blaring laughs out of incredulous, frequently perverse situations. This is a sex farce that doesn’t care if you’re gay, straight, masochistic, or whatever. It will throw you full force into the midst of this incredible, memorable, irreverent, wonderfully amusing heap. 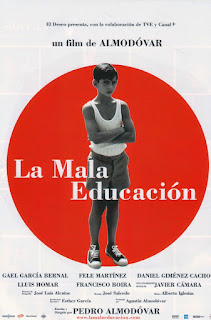 A movie director meets an old flame from boys’ school who wants to star in a movie he wrote, fictionalizing his own life. He discovers not all is exactly as it seems, and he must untangle the web of fiction and reality to discover the truth.

So, it’s time to skip forward from 1980 to 2006. With a couple odd decades to ruminate on what it means to be a film director, Almodóvar releases Bad Education, a film so clearly autobiographical that this title card fades directly to the title card of one of his protagonist’s films. Obfuscating this true to life material, which is also a scathing attack on the Catholic school system, are several layers of fictionalization that are perhaps the most frustrating of his career, and this is a man who does not shy away from circuitous narratives.

Although the narrative is difficult, I’s also supremely rewarding, providing a piano wire tension for the thriller elements that dress up this quasi-memoir. It’s telling that his film that most blends fiction and reality on the thematic level is also the one that literally folds in stark, horrifying truths from his own life. Almodóvar has always been obsessed with depicting the act of filmmaking and film viewing, but Bad Education combines them here, both within the narrative and the very structure of the film, which he uses to give him some distance from his past so he can really examine it properly.

It’s a fascinatingly complex journey, bolstered at every turn by the extraordinarily vivacious Gael García Bernal, who utterly transforms at every narrative juncture, playing a variety of different characters in various layers of the movie. His performance is a tour de force, layering broad comedy over a deeply tragic figure, then combining an object of lust with an unsettling threat, and always maintaining exactly what tone the script demands. He is key to understanding how the disparate portions of the film function, as well as how they all fit together.

With all this going on, Almodóvar isn’t up to as many visual tricks as usual, though one stunning, bloody transition is both shocking and profoundly thematic. It’s possibly the best cut of his entire career, so he’s not exactly coasting. Although my least favorite Almodóvar movies have all been his attempts at thrillers, which he is too warm and gooey to really pull off properly, Bad Education is a terrific, valuable piece of cinema packed with raw emotion and sensuality. This is certainly the director’s most personal work, and it shows by cutting straight to the bone. 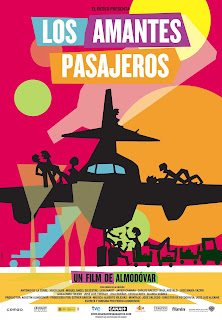 Three harried flight attendants attempt to distract the business class passengers from the fact that the plane is about to make a highly dangerous emergency landing.

At the time of this writing, I’m So Excited! is the most recent Almodóvar movie available in America (Julieta has already been released in Spain, but is taking its sweet time to make its way across the pond), which competes this slate of mini reviews’ span from the beginning of his career to the present. Some 36 years down the road from Pepi Luci, Bom (33 at the time of I’m So Excited!’s release), things have certainly changed. Two Academy Awards grace his shelf (Best Foreign Language Film for All About My Mother, Best Original Screenplay for Talk to Her) and a whole host of actors and actresses have returned time and time again, had fights and vanished for decades, then resurfaced with newfound vitality.

One of the strengths of Almodóvar’s work is his massive pool of performers, which he draws from pretty much constantly. Every movie he makes is graced with familiar faces and future celebrities, because he knows who’s good to work with and has an eye for recognizing raw talent. I’m So Excited! has a lousy reputation among fans of his work, but one thing nobody can argue against is his casting: Almodóvar stalwarts Penélope Cruz and Antonio Banderas cameoing as hapless airline employees, Volver standout Lola Dueñas as a psychic virgin, Cecilia Roth (who’s worked with Almodóvar since Pepi, Luci, Bom) as an aging dominatrix, and future Sense8 hottie Miguel Ángel Silvestre as a drug mule on his honeymoon. And that’s just some choice cuts from the jam-packed cast.

As you can see from those character descriptions, I’m So Excited! is very much a  return to the wacky ensemble comedy format that  defined the first decade of Almodóvar’s career. It’s a fast-moving, casually filthy romp with queer overtones, undertones, and everywheretones. The reason it has such a foul reputation is that it’s a stark departure form his recent works, which have been more prestigious dramatic fare like your Volvers and your Bad Educations. There is no such desire for cinematic respect in I’m So Excited!, which is leagues more shallows than his masterpiece Women on the Verge of a Nervous Breakdown, but as uproariously funny as anything he’s put out. This is the first film in a long time where he’s not putting on airs, and it’s mighty refreshing to see him let his freak comedy flag fly.

That said, there are some major, perhaps film-breaking flaws in I’m So Excited! A less-than brief interlude where we abruptly leave the perspective of the plane completely disembowels the film. Although this sequence is just as funny as everything else, the hysterical midair farce slowly building its momentum comes to a screeching halt that it never fully recovers from. And the rigorously classical comedic structure loses its timelessness with a funny, but extremely forced joke about Twitter. It’s odd that a reference to social media should feel anachronistic in 2013, but Almodóvar has built such a 50’s-esque pastiche universe in his filmography that it just feels like a violation.

But so it goes. I’m So Excited! is a spectacularly lopsided, shallow film that limps across the finish line, but it never stops being a hilarious, raunchy good time. Pitch perfect comic performances bounce around the confined, pressurized tube like pinballs, creating a raucous, glittering chaos that’s part Airplane!-esque mania, part Women on the Verge battle of the sexes, and part gay pride parade, with a dash of Beavis and Butthead scatological humor. It’s a blast, so it doesn’t need to be a masterpiece. Almodóvar has made enough of those to last a lifetime, so let’s just let him have fun.