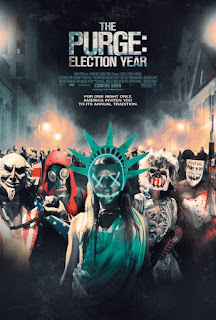 I dig the Purge movies. The first film I ever reviewed on this blog, The Purge is a decent home invasion pic working with a great sci-fi concept. The Purge: Anarchy expands that idea, trundling an ensemble cast through an L.A. gauntlet and furthering its political subtext. Now we have The Purge: Election Year, where the political subtext explodes into being more or less the actual plot. I dig over-the-top political horror movies and Anarchy was a major improvement on the original Purge, so I was cautiously excited for this one.

But here’s my problem. Purge writer-director James DeMonaco is like a different person each time he makes one of these films. On the first, he was a bright-eyed ingénue with big dreams. On the second, he was a John Carpenter aesthetician with the energy of a Tony Scott. On Election Year, he is a tactless boor who has heard that our country is experiencing political turmoil, but hasn’t read anything past the headlines. 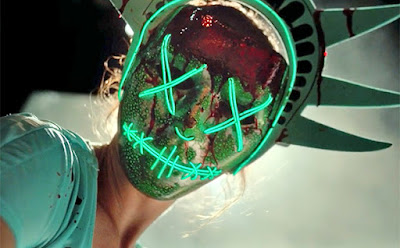 And you KNOW you can find this guy in the comments section of any political Facebook post.

So, here’s the story. Senator Charlie Roan (Elizabeth Mitchell) is running for president on the Democratic anti-Purge platform. She wants to abolish the yearly holiday where all crime is legal for 12 hours. She lost her family to the Purge and argues that it’s merely an excuse to target the poor and homeless, reducing America’s need to take care of them. In a false gesture of goodwill, the Republicans New Founding Fathers lift the Purge’s ban on eliminating government officials. Of course, they can afford the greatest protection services in the world, so this is just an excuse to assassinate the Senator.

Mission Accomplished This attempt fails and Senator Roan goes on the run with her security advisor Leo (Frank Grillo, returning from Anarchy), who has devoted his life to protecting her and helping her fight the Purge after his experiences two years ago. They end up taming with deli owner Joe (Mykelti Williamson), his employee Marcos (Joseph Julian Soria), and the vigilante EMT Laney (Betty Gabriel) to try and survive the Washington D.C. Purge. 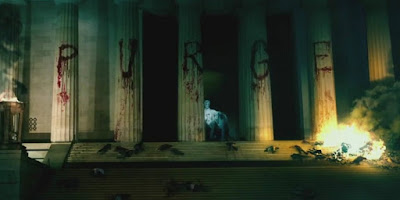 They must run, hide, shoot, and dodge all the hamfisted political allegory.

The Purge: Election Year could have been a tremendously fun action-horror romp that wears its politics on its sleeve but doesn’t take itself too seriously. Unfortunately James DeMonaco thinks he’s making Schindler’s List and not a Blumhouse movie. He dives so deep into the mechanics of his pretend election (there’s multiple conversations about poll percentages and electoral colleges. In a  Purge movie!) that he can’t help but fail. The obvious hot button topics are all present (racism, classism, gun control, Ferguson-esque riots), but it’s hard to take an anti-gun stance seriously when we’re watching a teenage black girl get shot in the face. BY OUR HERO. And we’re supposed to cheer.

In the context of the film’s plot, it’s not quite as bad as I’ve made it sound, but DeMonaco clearly hasn’t stopped to fully work out what he’s saying in this picture. Film violence is all fine and dandy, but bloody action films are a haven for the conservative worldview. Grafting a radical liberal moral onto this type of movie is like trying to thread a needle with the Empire State Building. That requires a lot of finesse, and the man responsible for this does not possess it in spades.

Not to mention that the dialogue is grating at the best of times and ruthlessly tasteless at best. Poor Mykelti Williamson has to swallow the worst tripe, constantly shouting “My Negro!” and making fried chicken jokes that really leave a foul taste when you remember this was all penned by a white dude. Every ethnic character is a rough-shod stereotype and even the dialogue that isn’t expressly racist or homophobic (if I had a quarter for every time somebody says “c*cksucker” in this movie, I’d outgross Free State of Jones) is just clunky (“I’ll butter YOUR bagel!”), which is something I never had a problem with in the other movies.

A running theme of any Election Year review.

That’s not to say that Election Year is an unremittingly awful Purge movie (we grades these things on a curve, we do). With a clear antagonist, the film is given a chase structure that allows for a tighter narrative than Anarchy’s “Purge tram tour” vibe. And the moments where we just get to witness what various citizens are up to on Purge Night have a pleasing nightmare funhouse quality that will translate supremely well into Universal’s inevitable Halloween Horror Nights attraction. Plus, one scene (from a car decked out in Christmas lights comes pouring a gaggle of masked girls dressed like they’re out at a bachelorette party while Miley Cyrus’ “Party in the U.S.A.” blares) actually reaches the bombastic silly heights that I perhaps optimistically expected this movie to be chock full of.

Other than that, though, it’s just plain vulgar. In addition to what I’ve already mentioned, we get a nice xenophobic nod to Germany that recalls the heights of Nazism (what fun!) and some pointed remarks about Juarez from somebody who couldn’t locate it on a map. The depiction of the liberal candidate as a flawless bright angel of purity (which Mitchell manages to ground in some semblance of angry humanity even though she’s been given the thankless role of essentially a Christ figure) and the conservative ruling party as a horde of sallow, hook-nosed, rictus grinning fiends like a wax museum diorama of Lon Chaney’s career is kind of fun, but obliterates every last shred of nuance in this extraordinarily tawdry odyssey through a sea of malformed allegory and friendly fire against the very groups this film is attempting to defend.

I’m on the hook for one more Purge film, because I do think something truly great could be born from this concept. But if it’s anything like Election Year, I’m gonna have to call it quits on binging these movies.