Christmas In July: Slay Bells Ring, Are You Listening? 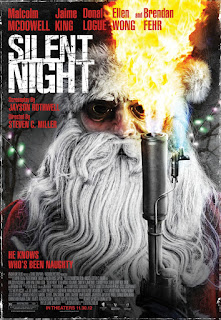 Yeah, they remade Silent Night, Deadly Night. It’s one that kind of slipped through the cracks, late to the remake party in 2012. Although the retitled Silent Night is a loose remake if there ever was one (and boy have there been a few), it shares enough elements with the original (like a Santa killer punishing the naughty, which some of the sequels couldn’t even manage, as well as an antler-based kill, a child gifted with a bloody weapon, etc.) that it at least proves that the original was on its mind, as opposed to the Sex Kitten romps of Prom Night and Sorority Row. That’s by far the best thing I can say about it, because – keeping in tone with the rest of the franchise – it kinda really sucks. 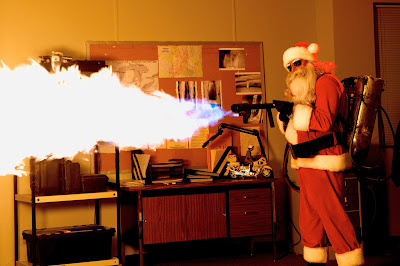 I’m so glad I’m finished with these garbage fires they called movies.

In Silent Night, Deputy Aubrey Bradimore (Jaime King) is forced to work on Christmas Eve when her coworker fails to show up. A line is dropped about this being her first Christmas without her husband, and by “dropped” I mean “hurled off a cliff” because this is literally never mentioned again. Together, she and Sheriff Cooper (Malcolm McDowell, essentially reprising his role as the scenery-masticating Dr. Loomis in Rob Zombie’s Halloween) discover that a killer dressed as Santa Claus has been rampaging through their little town of Cryer, Wisconsin punishing the naughty. This being a slasher movie (a subgenre we finally return to after two hyperbolically bizarre detours), Cooper elects not to call the FBI and handle the threat on his own.

Their search is hampered by a parade in which nearly every able-bodied adult man in town is asked to don a Santa suit, but they narrow down the suspects to a group of bad Santas that would make Fred Claus proud, including a wandering vagrant and a local coke dealer. 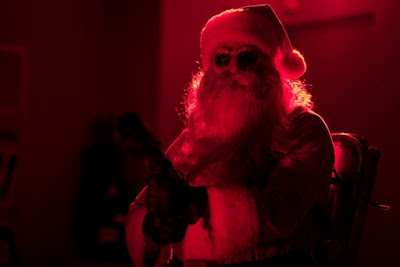 You’d think they’d find the killer with ease, considering he’s wearing giant steampunk goggles, but you would be wrong.

To be fair, Silent Night has a lot in common with SNDN1. It’s just as mean-spirited and poorly acted, but it lacks that veneer of 80’s charm that makes the original an enduring mainstay of the slasher genre. While SNDN featured a few too many rape scenes for my taste, it was a loopy, idiosyncratic film that told a strangely detailed, unwittingly compelling story about the societal ills that molded our apple-cheeked Santa killer. Silent Night just pulls a reverse Rob Zombie, stripping away the villain’s backstory and filling in that extra run time with an extra helping of nasty-minded sleaze.

There’s just something deeply depressing about watching a horde of wooden, amateur hour performers get chopped up in 2012 rather than 1984. It might just be the buffer of time making the legwarmered, permed 80’s seem a couple degrees askew from reality, but I think I can blame two movies in particular: Texas Chainsaw Massacre 2003 for igniting the remake boom, and Scream for rendering it basically impossible to make a straightforward slasher ever again. By virtue of being a remake, a movie openly challenges the original film with the unspoken claim that it will either be better or at least satisfyingly different. When it is neither, it doubles down on disappointment. And Silent Night is neither in a spectacularly unpleasant way.

This movie is just plain vicious. In addition to being callously exploitative (a topless woman runs around for what feels like hours before being fed into a wood chipper; while slasher movies are best known for boobs and blood, titillation and mutilation are actually pretty rarely in the same frame save for the sleazier entries – The Prowler, Bloody Moon, etc.), it’s horribly misguided.

Horror films always need to walk on eggshells when it comes to killing a child, and while certain slashers have succeeded (SNDN among them), the death of a minor here is despicably prolonged, involving electrocuting her with a cattle prod until she stars foaming at the mouth before finishing her off. It is at this point where the over-the-top violence of Silent Night crosses the line. Hell, it throws a tarp over the line hoping you won’t notice, and dashes right on over it. Its obscene, boundary-free eagerness for butchery is vaguely sickening.

And I’m someone who watched Maniac without batting an eye.

I will, however, give Silent Night points for its occasional doses of pure, inexplicable lunacy.  There’s certainly a whiff of bad-good charm around Malcolm McDowell’s flagrant disinterest in the project, but by far my favorite scene belongs to the pre-slaughtered 13-year-old- girl and her mom. The spoiled little brat knocks her mother’s heart medication to the floor (!) and demands “F**k church! I want to go to the mall!” instantly becoming the most compellingly unlikeable child this side of Veruca Salt. She’s awesome. And then of course we have a whole scene lit with red and green emergency lights like it’s a Saw holiday special, and then there’s the fact that every time Jaime King walks through her impossibly idyllic small town, greeting everyone she sees and smiling at the whirl of Christmas activity, you expect her to burst into song à la Belle in Beauty and the Beast.

As you well know, I am a sucker for crazy camp, so this goes a long way toward helping me survive the dismal disarray of the rest of the film. And to be fair, there is some incredible gore that would be a real treat if Silent Night hadn’t poisoned the well by frontloading its most distasteful killings. A gushing leg wound and a head split by an axe are two particularly convincing Grand Guignol effects of the highest order.

The movie would at least be a passable horror roller coaster if it weren’t for the out-of-control tone that nose dives into torture porny grunge every chance it gets. Or the story that aimlessly wanders around, sloughing off subplots like a snake shedding its skin. Or the anonymous killer performer that lumbers around like a plumber who just soiled his pants. Ugh, what a waste. I’m terribly disappointed to end our Christmas in July segment like this, but Silent Night is just another abortive holiday thriller with enough potential energy to keep me on the hook, but not enough ambition and drive to do anything with it.