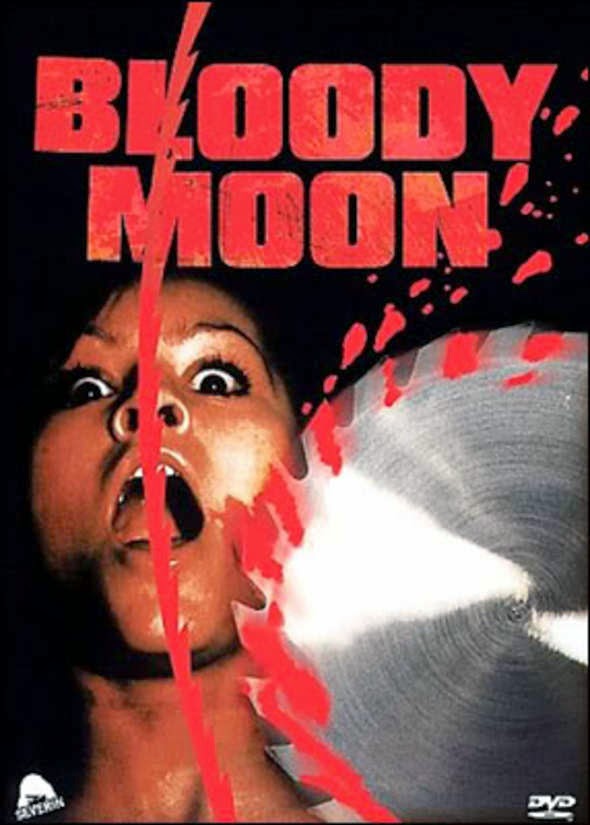 European slasher films are something special. Whether they're top shelf fare like Suspiria and Twitch of the Death Nerve or low rent knock-offs like Trhauma and Murder Syndrome, there's always a spark that dances in the eyes of the Eurotrash flicks. Perhaps its just that I've grown used to the Western modes of storytelling or that I allow the language barrier to gloss over simple mistakes, but whatever it is, these films are truly, undeniably different.

1981's Bloody Moon (AKA Die Säge des Todes) is one of these films. What would have otherwise been an unremarkable smear on a forgotten footnote of cinema history is double-filtered through the addled mind of Spanish sleazemeister Jesús Franco and the resources of West Germany, then slathered with the most literally transcribed, un-emphatic dub ever created by stoned Americans trapped overnight in a recording studio with nothing else to do.

It's not a film you'll want to take home to mama, but it's unique in that ineffable way that the American films of the time couldn't capture. It's certainly not better than the bulk of its peers, but its logistical missteps, overwrought dialogue, and surreal scene structure at least create an indelibly memorable experience. 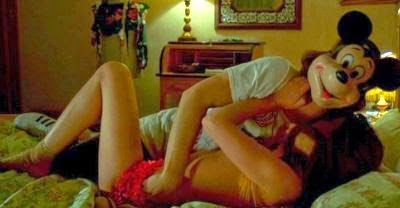 Bloody Moon takes place on a remote resort in Spain, which one Professor Alvaro (Christoph Moosbrugger) has converted into a language school. The estate is the home of Countess Maria Gonzales (María Rubio), an elderly spinster in a wheelchair. Although her niece Manuela (Nadja Gerganoff) takes care of the place, she has bequeathed her fortune to her nephew Miguel (Alexander Waechter), who has a deformed face (it's burned, I guess, but it just looks like spilled oatmeal crusted around his forehead) and the unfortunate quirk of murdering women who won't sleep with him.

As the new crop of students arrives for the semester, late arrival Angela (Olivia Pascal) begins to suspect that a mysterious prowler is stalking her and her friends. There's barely enough characterization of the women in this film to even qualify them as Meat rather than Wallpaper, but they are Inga (Jasmin Losensky), a whiny, unlucky in love type - think the beginning of a Jennifer Aniston movie, Eva (Ann-Beate Engelke), a blonde, and Laura (Corinna Drews), a blonde who dies wearing cheetah print hot pants.

After a series of gruesome murders, Angela must rush to discover the identity of the killer. Is it Miguel, who is always hanging around, peeping into windows? Is it Manuela, who seduces her brother and leers up at the moon topless every night? (See? European films are something special.) Alvaro, who is having trouble paying his rent and is so despicably lazy that his "school" is just a set of booths with headphones where the students listen to language tapes? Antonio (Peter Exacoustos), the resident tennis stud/gardener with a hive of jealous women orbiting around him? Or is it Paco (Otto Retzer), the groundskeeper who always seems to be quietly hallucinating in the background while handling sharp objects?

Well, that's for me to know and you to find out, but rest assured the central mystery draws from the best and brightest tropes of the giallo film. A suspect list of biblical proportions? Check. An elderly stateswoman with a dangling inheritance? Check. A nonsensical plot that exists only insofar as it is scooting helpless women toward their untimely demise? Check, check, and check. 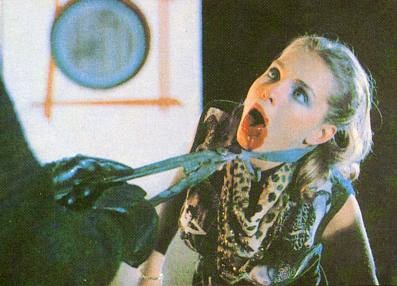 I've learned so much about garden tool nomenclature while watching these films.

As a low budget Eurotrash slash picture, do I even need to tell you that Bloody Moon isn't scary to the slightest degree? Sure, there's sequences that drum up some semblance of a gut feeling, but these are generally through the defiance of expectations, like "Deary me, they killed a real snake. Someone call PETA." or "Yeah, I legitimately didn't expect them to run that child over with a car." They even manage to screw up the perennial Spring-Loaded Cat scare, making our fateful feline nose open a door and then somehow leap up at the unsuspecting victim from floor level.

It's cartoonishly terrible, but at least this allows the film to lean into the curve and embrace its campiness. The actors chew the plaster off the walls, the music sounds like either Pac-Man's death throes or Frankie Avalon and Ritchie Valens' attempt at Gone with the Wind, and the cinematographer ambles along, liberally applying zooms wherever he deems necessary. And that's everywhere. There's plenty of trash panache littered around, like the obligatory roller disco sequence, the wooden dummy that appears in a bungalow during the height of a chase sequence, or the conspicuously foam-textured boulder inexplicably careening from the bluffs toward our heroine.

There's dozens of these moments floating around the film, completely separate from any sense of narrative motivation or realism, buried like chestnuts in the thick bed of indigestible dialogue. I know I mentioned the laughably bizarre dub earlier, but it's time to dive in. Each line is tortuously wrenched from its mother tongue, fastidiously converted word by unrelenting word until it's nothing but an incomprehensible, slavering mash.

One of my favorite chestnuts takes a place of honor as the title of this review, but other favorites include "Caress me everywhere, melt in my arms," "I could use a drink like beer," and "As a lover, he's fantastic." The entire film is like this. It's like Yoda reading Shakespeare and it is exquisite. 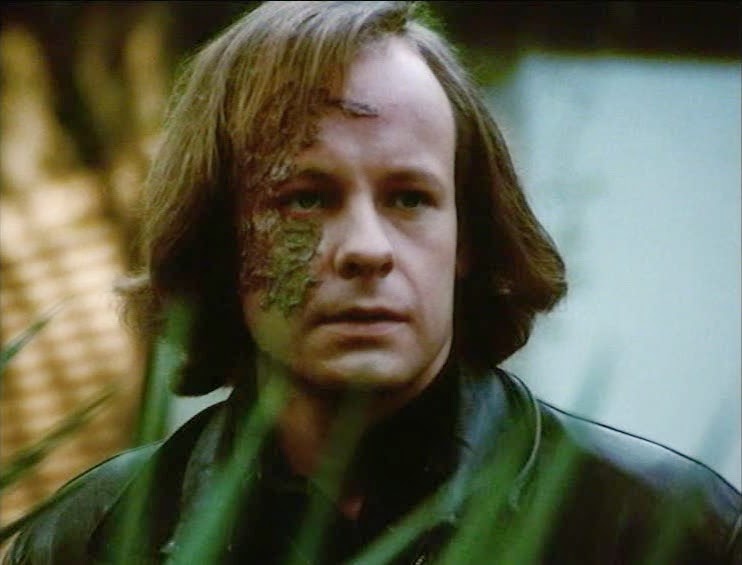 And come to think of it, Miguel kind of looks like the illicit love child of Yoda and Shakespeare.

The only straightforward appeal that Bloody Moon has lies in its gore sequences, which are tremendously fake, but fun and blood-soaked in the best kind of slasher tradition. These sequences were enough to earn the film an honored spot on the UK's Video Nasties list, and they are a veritable Ice Bucket Challenge of grue, splattering its victims every which way with scissors, gardening tools, granite blocks with giant buzz saws, and much much more.

The plot is far too dull and rudimentary to carry the weight of its superior camp sequences, but Bloody Moon is worth checking out for the amateur masochist on the prowl. It's the perfect movie for a low pressure evening hangout if you have friends who aren't too great at paying attention. A less than hearty, but feebly determined thumbs up from me!

Killer: [Alvaro (Christoph Moosbrugger) and Manuela (Nadja Gerganoff)]
Final Girl: Angela (Olivia Pascal)
Best Kill: Inga lets a man with a stocking over his face tie her to a cement slab because she thinks it's kinky, but then he cuts her head off with a circular saw.
Sign of the Times: I don't know whether this is supposed to be a towel or a dress, but it's doing both jobs poorly. 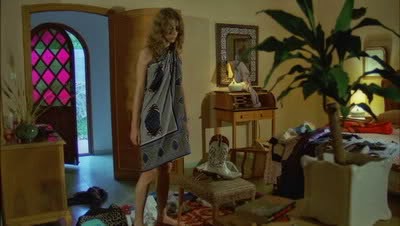 Scariest Moment: The language students are forced to learn the "vosotros" conjugation.
Weirdest Moment: Inga pretends she has a lover in her bungalow by bouncing on her bed and moaning.
Champion Dialogue: "For progress in Spanish, nothing beats lessons in bed."
Body Count: 9; not including a snake that gets decapitated with garden shears.
TL;DR: Bloody Moon is a suspenseless giallo riff, but the campiness and gore slightly make up for it.
Rating: 4/10
Word Count: 1295
Also sprach Brennan at 1:27 PM