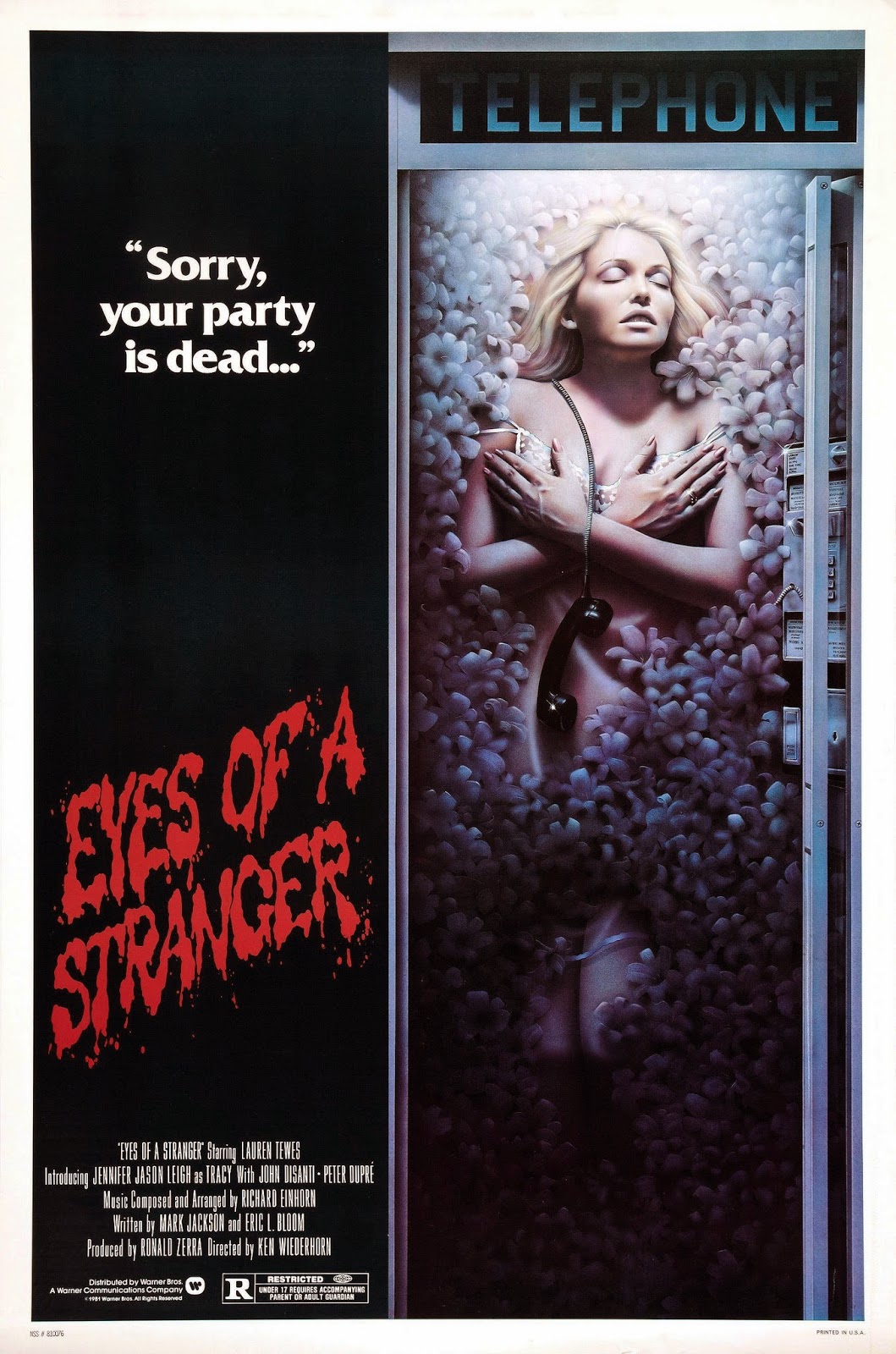 Eyes of a Stranger is a slasher film displaced in time. A sleazy rape-murder thriller in the vein of the late-70's grindhouse era, the film came late to the party in March 1981, by which time the despotic teen splatter film had risen to its rightful throne. It's a lonely straggler, left out in the cold by the genre's abrupt transition following the release of Friday the 13th.

The true misfortune of this is that Eyes of a Stranger is possibly the best of its skeevy brethren, certainly far more than its lackluster counterpart from 1980, the utterly reprehensible Don't Answer the Phone. Taking cues from the vibrantly grimy Maniac, the film rises above its lowly stature to actually bestow a modicum of artistic merit upon itself. 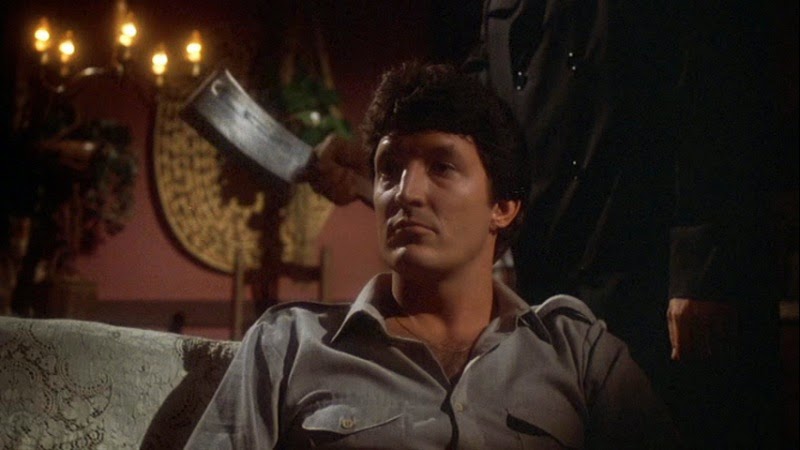 Not that I'm asking for high art from my meat cleaver movies.

The film tells the story of Jane Harris (Lauren Tewes), an empathetic Miami reporter who is profoundly personally affected by a recent rash of rape-murder crimes that has been striking the city. These crimes trigger her feelings of guilt about the molestation of her sister Tracy (Jennifer Jason Leigh in her first feature film role), which left her deaf and blind. When she begins to suspect that her neighbor Stanley Herbert (John DiSanti) is the culprit, she takes it upon herself to investigate, despite the protestations of her lawyer boyfriend David (Peter DuPre).

While it could have just been yet another throwaway trifle of misogyny, Eyes of a Stranger has much more to it than that. On top of two strong female protagonists, the film has a focused sense of style and an exquisite amount of tension during many sequences. It's almost like it's actually a movie instead of a string of nasty kill scenes. What an idea!

Don't get me wrong, there's still plenty to dislike about Eyes of a Stranger. Its focus on rape as a key element of the murder sequences prevents them from being any fun, though the bulk of the sex crimes are thankfully relegated to the offscreen void. That keeps the kills from becoming too nasty, but it also keeps them from becoming much of anything. In a film with a flimsier plot, this would have sunk the entire affair like a lead iceberg.

But lo and behold, we have a surprisingly solid thriller narrative anchored by characters with actual dynamics. The victims are still generally one-dimensional and introduced only to die five minutes later, but the main storyline is nothing to shake a stick at. As the body count begins to pile up, Jane's foolhardiness puts a strain on her relationship with David, with whom she has been using Tracy as an excuse to avoid shacking up. 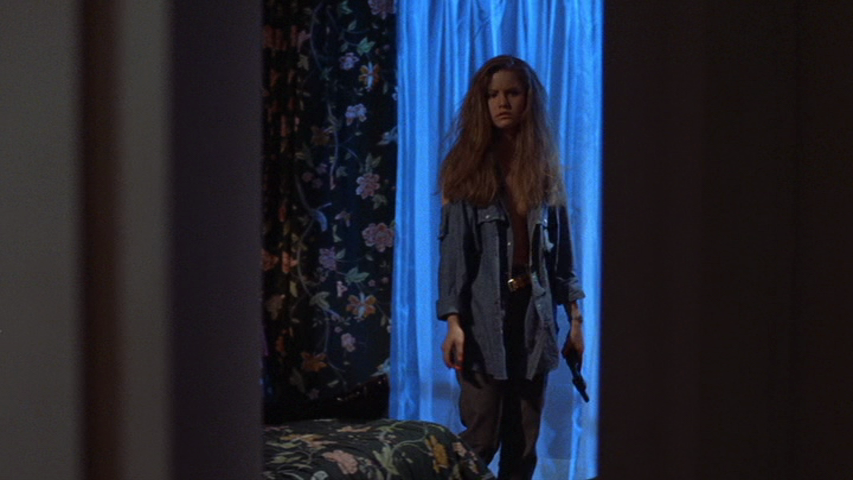 Despite the fact that she can handily do laundry, make toast, go swimming, and all sorts of totally normal teen things all by herself. As a matter of fact, I think the laundry thing puts her ahead of the average teen.

So, in Eyes of a Stranger we have realistic characters interacting in a world with consequences, many of whom are performed with surprising skill. Tewes is absolutely stunning, creating a nuanced backstory told completely by her face, and Jason Leigh milks tension out of every moment she's in, no matter how brightly lit or visually unimpressive they may otherwise be. Only DiSanti is a weak link, providing an utterly banal villain performance in which he is out-acted by his car, which has a swooping Night Rider design and sinister eye-like headlamps. Honestly, if there's ever a sequel in the works, any smart producer would tap that car first thing.

Earlier I mentioned the film's sense of style and I'm going to expand upon that now, because segues are the worst. Especially in the first act, the world of Eyes of a Stranger is populated with rich, vivid colors that, much like its spiritual forebear Maniac, invoke the atmosphere of the classic Italian gialli.  The swooping camera slowly carves its path through highly saturated greens and reds, lending the film an air of class and panache before it brutalizes the audience.

I've already spoken out about the imbalance in the kill sequences, which struggle to avoid the nastier side of exploitation, in which violent rape is merely an excuse to see boobs, but many other moments before and after the questionable acts are fraught with genuine tension. I shudder to spoil too many of these, because they're really quite alarming, but Eyes of a Stranger puts in a bid at actually achieving scares, something many an anemic slasher has utterly failed to do.

On top of all this, the film has an intimate, detailed sense of its own geography, it paws at thematic potential with a half-cocked subtextual discussion on sight and the male gaze, a unique exploration of the life of a girl cut off from her senses, and it's possibly one of the most female-empowering films of its ilk. Even in the finale, which sets up a "the hero races to the scene" subplot, the women prevail over all and the bonds of sisterhood prove to be the most effective defense. It's like Frozen but with more belt stranglings! 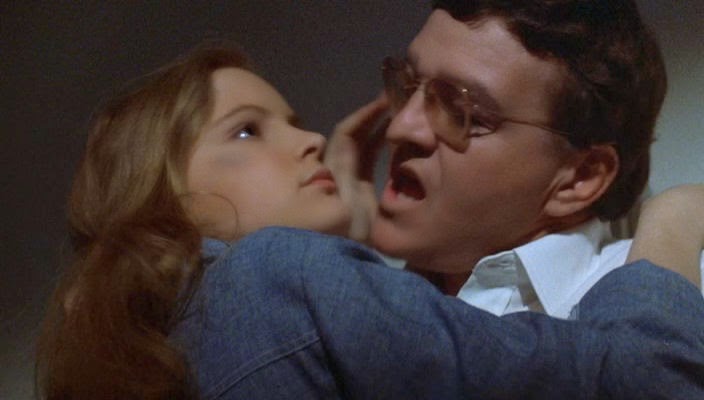 Although to be honest, I'm a little sad nobody even attempted to whack Olaf the snowman.

Tom Savini doesn't get a lot to do, but his effects perk up the film where it counts, and creates an ultimately very enjoyable experience. I'm extremely hesitant to throw my support behind Eyes of a Stranger because despite its charms, it's still beholden to its pedigree of sleaze, but all in all it's a worthwhile watch.

Killer: Stanley Herbert (John DiSanti)
Final Girl: Jane Harris (Lauren Tewes) and Tracy Harris (Jennifer Jason Leigh)
Best Kill: Jeff is decapitated and his head is placed in a fish tank, much like the awesome He Knows You're Alone from the year before. 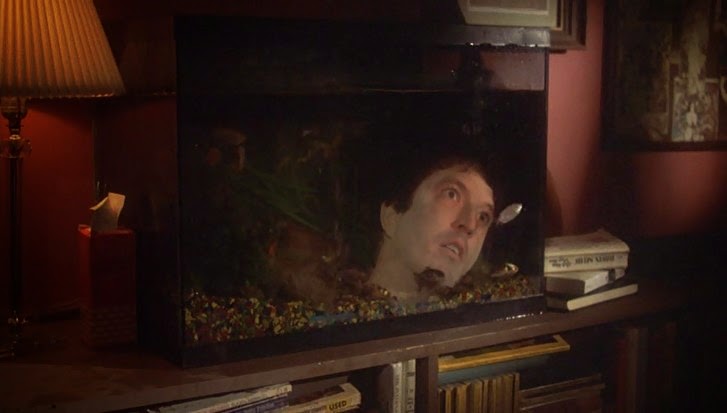 Sign of the Times: I'd be screaming too if I was asked to put on that forest green tracksuit. 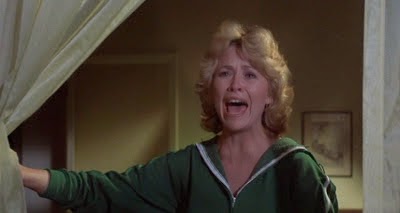 Scariest Moment: Tracy goes about her business in the kitchen, but when she claps her dog doesn't come. We see that it's dead on the floor and realize that the killer is in the house.
Weirdest Moment: Debbie watches Shock Waves on TV. This is weird because nobody has ever willingly watched Shock Waves.
Champion Dialogue: "Why don't you go stick it in your ear and then go jump in the bay?"
Body Count: 7; not including a corpse found in the beginning of the film, or Tracy's seeing-eye dog.
TL;DR: Eyes of a Stranger is weighed down by a sleazy atmosphere, but features some terrific performances and a great deal of legitimate tension.
Rating: 6/10
Word Count: 1178
Also sprach Brennan at 3:53 PM