Cardboard Science: Women Are From Venus 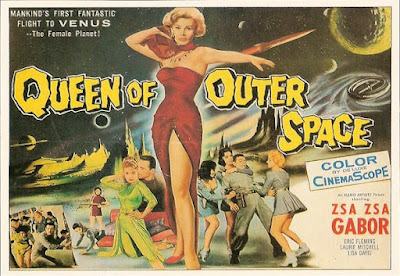 Year: 1958
Director: Edward Bernds
Cast: Zsa Zsa Gabor, Eric Fleming, Dave Willock
Run Time: 1 hour 20 minutes
So, now we sally forth into phase 2 of the Great Switcheroo, where Hunter Allen of Kinemalogue has assigned me three 50's science fiction B-pictures to examine for your spooky season pleasure, in exchange for three of my 80's slashers. He has already apologized to me for the trashiness of this particular slate, but I agree with him that the movies are short enough that it's hard to complain about literally anything they do. Also, today's subject, which is 1958's Queen of Outer Space, is another film with an incredibly misleading title but a not altogether dishonest poster design. If your pleasure lies in the form of watching scantily clad space ladies, look no further.
This project also has a connection with previous years, coming from the director of 1959's Return of the Fly and starring Hungarian-American ultra-celebrity Zsa Zsa Gabour, who appeared in the Census Bloodbath entry A Nightmare on Elm Street 3: Dream Warriors a scant 30 years or so later. 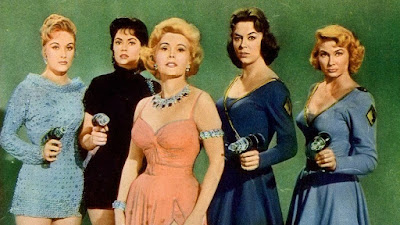 It's probably not a good sign that Elm Street 3 is listed higher than Queen of Outer Space on her "known for" page on IMDb, considering she's in that movie for about 12 seconds. Although, it's probably not a good sign that Queen of Outer Space is on her "known for" page in the first place.
So, I suppose there's a plot lying around somewhere. Interchangeable white squarejaws Capt. Neal Patterson (Eric Fleming), Lt. Mike Cruze (Dave Willock), and Lt. Larry Turner (Patrick Waltz) live in a not-too-distant future where space travel is still pretty exclusive, but people are out there doing it. They're charged with the inauspicious task of bussing the scientist Professor Konrad (Paul Birch) to the space station he created along with some supplies. However, somebody drew on the film reel with a marker they are attacked by a super deadly space laser that destroys the space station and sends them rocketing off into parts unknown.
After an undetermined amount of time (they've been knocked unconscious), they crash land on the surface of a planet, an idyllic indoor forest land with obvious blue wall backdrops. It turns out that they are on Venus, and they soon find themselves captives of the Venusians, which are a tribe of sexy minidress-clad women who have banished all the men they haven't slaughtered onto an orbiting moon. They are led by the masked Queen Yllana (Laurie Mitchell). Soon the men discover that not all the women are happy living under her iron thumb, because well... they're horny, mostly. And they have all these pickle jars that nobody can open. Talleah (Zsa Zsa Gabour) attempts to help the men escape, leading a vague sort of revolution in the process. It turns out that most of the women on the planet aren't too keen on the Queen's plan of destroying Earth with a big evil nuclear space laser, because they aren't shrill man-hating harpies like somebody we know. 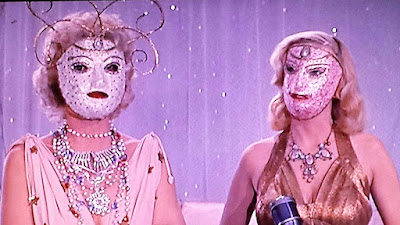 Her motivation for being evil is literally that she's ugly, because the 50's.
To be completely honest, I like almost nothing about Queen of Outer Space. At least in the previous trashy Cardboard Science entry, Robot Monster, there was a shirtless man wandering around for the entire run time. Obviously, I understand that for many straight people at the time, Zsa Zsa Gabour in a minidress was to this film what "the leading man is getting married with his nipples showing" was for me in that one. But I'm a gay. I need some great outfits to go on the pretty ladies in order to get me through, and only the Queen's jewel-encrusted cricket masquerade ensemble really delivers in that respect.
Obviously, this film wasn't ever going to depict an Amazonian feminist utopia, but it really is a shame that the humor is couched in such egregious sexism. It's so bad it does occasionally circle back around the horn to be ironically amusing for how unabashedly terrible it is ("how'd you like to drag THAT to the senior prom?"), but generally the jokes are the same basic-ass, stale "take my wife... please!" gags that cis male comic have leaned on for decades before and after this. As delivered by a bunch of wooden performers who cackle and smirk at one another incessantly. And this is a movie that really relies on its comedy, because it's too low budget to really do almost anything exciting visually.
The entirety of their effects budget is spent on a short clip of the space station and shuttle being attacked, a spaceship interior with a tiny little window through which a colorful light is shone, a big spider puppet that takes up about five seconds of screen time but still lands itself prominently on some posters, and burn makeup for Queen Yllana that looks like Mary Lou Maloney's burned face from Prom Night II. Oh, and they clearly got some actual footage of a spaceship blasting off, because they use every. second. of. it. in a hideously prolonged sequence. 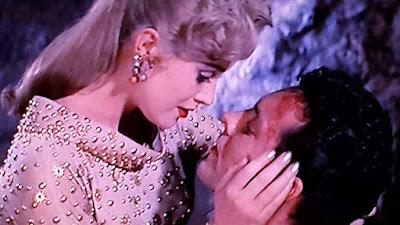 They're living by the classic dictum that women are the cheapest special effect.
Let me root around a little more. Is there anything good in here? It's certainly not Zsa Zsa, who absently delivers her dialogue while squinting at cue cards that seem to be a couple yards farther away than they should be. It's also not the camera work, where the lenses warp and distort the edge of the frame every time they pan. Or the production design, which at least has the good sense to make things bright and candy colored, but only delivers a series of identical pink and blue hallways.
Oh hey, I found something! The music might be generic, but it's delivering on the electronic oogly-woogly score I need for a 50's movie set on another planet. And honestly, for all it's a boring slog that doesn't have anything remarkable to break up the monotony, I didn't actively despise Queen of Outer Space, so that's nice I guess. It's a warm bath of enough B-movie tropes that it goes down easy enough, even though I have at least a dozen films I would point you to before this one, thanks to being under Hunter's tutelage for almost a decade at this point.
That which is indistinguishable from magic:
The morality of the past, in the future!:
Sensawunda:
TL;DR: Queen of Outer Space is a bland, generic, sexist film that just spits out low budget sci-fi tropes hoping you'll be too distracted by beautiful women to notice.
Rating: 3/10
Word Count: 1368
Cardboard Science on Popcorn Culture
2014: Invaders from Mars (1953) The Day the Earth Stood Still (1951) Them! (1954)
2015: The Giant Claw (1957) It Came from Beneath the Sea (1955) The Brain from Planet Arous (1957)
2016: Invasion of the Body Snatchers (1956) Godzilla (1954) The Beginning of the End (1957)
2017: It Conquered the World (1958) I Married a Monster from Outer Space (1958) Forbidden Planet (1956)
2018: The Fly (1958) Attack of the 50 Ft. Woman (1958) Fiend without a Face (1958)
2019: Mysterious Island (1961) Robinson Crusoe on Mars (1964) Plan 9 from Outer Space (1959)
2020: The Colossus of New York (1958) It Came from Outer Space (1953) Rodan (1956)
2021: Robot Monster (1953) Queen of Outer Space (1958) The Cyclops (1957)