Reviewing Jane: The More I See Of The World, The More I Am Dissatisfied With It 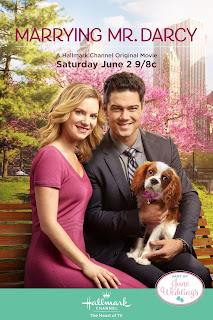 So far in the line of duty, I've only encountered one franchise built off a riff on Jane Austen, which would be the Bridget Jones movies. The first film (adapted from the novel by Helen Fielding) was based on Pride and Prejudice and the sequel Bridget Jones: The Edge of Reason was based on Persuasion. That's interesting in and of itself, but then 2018 rolls around and the Hallmark Channel goes completely wild as usual.

2016's Unleashing Mr. Darcy, a modernized retelling of Pride and Prejudice set in the dog show circuit, was deeply mediocre. Which means it's an above-average movie for Hallmark and of course earned itself a sequel. The wages of sin come in the form of Marrying Mr. Darcy, from the director of the 2010 remake of I Spit on Your Grave. 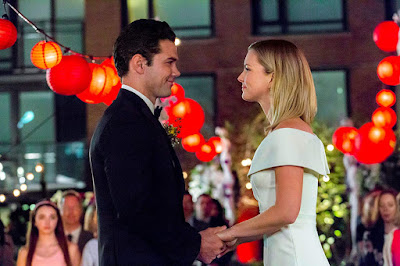 Appropriately, this movie spits on the grave of Jane Austen.

Let me lay out two scenes for you. 1) Elizabeth (Cindy Busby) feels that her fabulously wealthy CEO fiancé Darcy (Ryan Paevey) is pulling away from her because he keeps working extra hours at work. What she doesn't know is that he's working extra hard because he's planning for them to have a monthlong honeymoon. You know, the kind of surprise that's appropriate to spring on a woman with a job. 2) During wedding planning with Darcy's mother-surrogate Aunt Violet (Frances Fisher, tempted back by the smell of that Hallmark money), Elizabeth feels like her desire for a simple wedding is being crushed by the upmarket society the Darcy family keeps.

You got those two scenes down? Good, because they're the only two scenes in the movie, repeated back and forth, back and forth ad nauseam until the movie runs down the clock enough to give us the promised wedding. 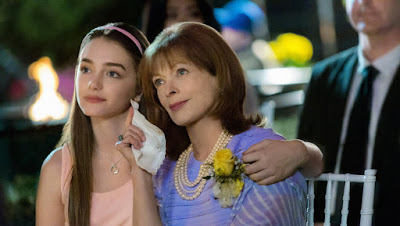 Did I mention that this movie was the centerpiece of Hallmark's annual June Weddings movie marathon? I bet you didn't think you'd be learning so much on a horror blog.

The fascinating thing about Marrying Mr. Darcy is that it attempts to create a sequel beyond the ending of Pride and Prejudice, which is usually the stuff of fan novels rather than actual cinema (I'm stretching the definition of "cinema" to the breaking point, but this is a feature film so I say it counts). The fact that it's not even a good sequel to Unleashing Mr. Darcy does not inspire confidence. It literally mentions the dog show element in exactly one line (conveniently, about how Elizabeth doesn't want to do dog shows anymore), and the dogs who were pretty much central characters in the film have been relegated to cute transitions. When the screenwriters can't figure out how to end a scene, they just have a character coo over a puppy until the audience forgets there's a plot going on and they can switch to a new scene without anybody noticing.

Naturally, it also removes the element that made it Austen-y at all. The bare minimum that most Pride and Prejudice adaptations (including Unleashing etc.) achieve is featuring a couple that has friction before eventually falling in love. But now that Elizabeth has already sanded the edges off of Darcy and has achieved her happy ending, the character is a totally featureless block of wood. He's a perfect Tuxedo Ken doll for the audience to project whatever man they want onto. Not only is his sublime, unwavering love and support for Elizabeth irritating, it actually makes the movie actively worse.

While Darcy's actions are causing problems for Elizabeth, they're actions that are so clearly morally "good" that it's hard to care. And in every scene they have together they constantly profess their love and mutual respect and immediately apologize for the way they've been acting, pushing the tension the film has built right back to zero. I was literally more interested in the romance between Elizabeth's sister and some dude who I've surely forgotten from the first movie, and they collectively have about three-quarters of a scene in this, in which they do absolutely nothing. 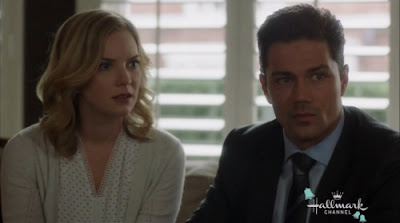 The back-breaking lengths this movie goes to avoid conflict are truly staggering.

So Marrying Mr. Darcy is a failure as a narrative, and being what it is, it's also a failure as an aesthetic object. From the lighting (even the outdoor scenes are lit like they're inside a Macy's) to the production design (Darcy's New York apartment has a roaring fireplace in mid-June) to the acting (at best, they're a fast asleep Frances Fisher, at worst they're cold automatons petting doggies without a hint of affection), every element fails to achieve even the basic competency one expects from a TV movie.

The wedding cake the happy couple eventually chooses is "vanilla buttercream with white ganache drizzle," the revolting blandness of which reflects how insipid and unchallenging this entire affair is. I get that that's exactly what Hallmark is going for with their movies, so I guess they get top marks for that. If you want an endless parade of women sitting on cushy chaise longues with champagne flutes clutched in their talons, boring handsome men who are full of empty flattery and refuse to take their shirts off, and a misunderstanding-based plot that wouldn't pass muster in a sitcom, then this is the movie for you. And I get being in the mood for that. But this is not what I'm looking for from a movie, not now, not ever.