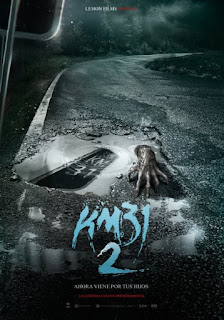 As you may recall from earlier in this marathon, the film KM 31, which reinterpreted La Llorona as a roadside legend with a heavy dose of J-horror imagery, is one of the better entries in her mythology. Director Rigoberto Castañeda is certainly one of the best we've had on hand, someone who knows how to actually craft an atmospheric, spooky image. So I wouldn't say I was necessarily excited that he made a sequel to the film a full decade later, but I felt I was at the very least in safe hands for one of these final legs of my trek through all of Llorona-dom.

Plus, I've been so badly hurt by some of these movies, this one couldn't possibly sting as bad.

Shockingly, this is also a direct sequel to KM 31. We pick up seconds later, wrapping up that film's ending stinger (with a truly wild zombie-esque gore effect) before cutting to ten years later. Our surviving hottie Nuño (Adrià Collado) has been institutionalized and Detective Martín Ugalde (Carlos Aragón) has retired. That is, until he's approached to help out with a new case. In a neighborhood quite close to that lonely stretch of highway in the Desert de los Leones, seven children go missing in a bizarre pattern every couple years. The police suspect a group they've dubbed The Seven Missing Children Gang (apparently it doesn't take creativity to rise the ranks of the police system), but Ugalde is hired by a high-ranking politician to investigate the disappearance of her child because she knows he has experiences outside the mundane realm.

The fact that he has experience with literally this exact same entity is something that nobody seems to realize, not even him, so we're stuck with another film about people investigating La Llorona, even though we've already seen all of this before.

But at least we get to rip off Poltergeist now instead of The Grudge!

So, it turns out I was partly right. Rigoberto Castañeda certainly hasn't lost his flair for uncanny imagery. La Llorona arrives in the homes of their victims via a puddle with viscous water dripping backwards toward the ceiling, which is terrifying. And the CGI that renders her body (which is shown early and often in this one) is at least a little smoother and more believable. But his talent for imagery extends beyond the horror sequences. The cool color palette continues to drench his tale in grim stillness, and Ugalde's apartment is a lovely metaphor for his mental state, dominated by a shattered fish tank piled to the brim with empty beer bottles.

Unfortunately, he seems to be the M. Night Shyamalan of Mexico, because while his visual craft is on point, the man really should be farming his scripts out to somebody who knows what they're doing. The Seven Missing Children Gang isn't a sly insult to the police, it's just a symptom of the screenplays's deep inferiority. While the first film didn't make a whole lot of sense, it at least worked within the J-horror framework it was going for. This film makes even less sense, and it sadly lacks the anchor of interesting characters the first one had going for it. It's just a whole lot of people telling us that they're smart while making incredibly dumb choices and reciting flat, uninspired lines all the way along.

Pictured: Me reacting to any dialogue in the movie.

I think the deepest problem is the film's choice to center itself around Ugalde. I assume he was the only actor willing to come back for the full shoot, but there's no emotional center to the character, and his presence forces the film to contort itself into a hardboiled retired detective story rather than a bona fide horror flick. The mystery was the worst part of the original film, and now it's the entire focus of the sequel, doubling down on pointlessness because - as I mentioned - we've already solved this f**king mystery!

By the time it swings into a totally bonkers third act involving a heist at the sanitarium, a psychic child, and a literal ticking time bomb, it has completely run out of goodwill by crushing you in a vise of sheer boredom for an hour. It's certainly not the worst of these films (there is a script, and you can see everything), but it's maybe even more disappointing because it completely fails to build on the solid potential of the original.