This week we’re anticipating The Emoji Movie, entirely populated by characters that have a single dominant personality trait. In honor of this animated tour de force, we’ll be exploring 1988’s Bad Dreams, about a therapy group for borderline personality disorders. 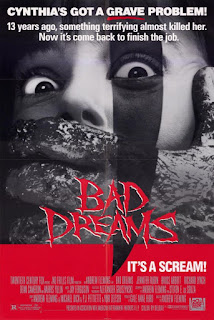 I’ve noted before that the biggest trend in late 80’s slasher films is the incorporation of a supernatural element following the success of Freddy Krueger and the Elm Street franchise. There are certain tiers to this trend, the lowest being the sudden inclusion of elements like a telekinetic girl in Friday the 13th Part VII or a vengeful beauty queen ghost in Prom Night II, Then you get to the second tier of rip-offs, where films have transparently desperate titles like Deadly Dreams and Dreamaniac. Bad Dreams doesn’t belong in this tier. Hell, it doesn’t even belong in the top tier, where the Bollywood dream demon Mahakaal: The Monster resides. Bad Dreams is the grotesquely blatant, enormous cake toper straddling this entire trend and threatening to topple the whole thing over.

A Nightmare on Elm Street 3: Dream Warriors gets a chill down its spine anytime someone utters the name “Bad Dreams.” Let me paint you a picture: starring Dream Warrior Jennifer Rubin (who played Taryn, the “beautiful and bad” drug addict), Bad Dreams revolves around members of a group therapy circle and their bland white doctor as they’re menaced by an incorporeal kier with a burned face who makes their deaths look like suicides. The details are slightly different, and we’ll get to them when we Meet the Meat, but hot damn is this not a subtle ploy for the throne.

There was no Wes involved, but they were certainly craven.

So, Bad Dreams follows Cynthia (Jennifer Rubin), the only survivor of a Peace and Love and Suicide cult who were burned alive at Unity Fields in the 70’s. She has just awoken from a 13-year coma and must acclimatize to the 80’s in a psychiatric hospital run by Dr. Barrisford (Harris Yulin). She joins a group therapy session run by Dr. Karmen (Re-Animator’s Bruce Abbott, who must be very tired of hospital sets), but soon realizes that she’s putting the other patients at risk when the burnt specter of her cult leader Harris (Richard Lynch) returns to claim her life, killing her friends in the process.

That group includes the cripplingly shy Lana (Elizabeth Daily AKA Tommy Pickles on The Rugrats), and this film takes a page from Friday the 13th Part V in what exactly constitutes an emotional disorder; Gilda (Danita Jo Freeman), who seems to be psychic and acts only as a mouthpiece for Harris rather than an actual character – seriously, what is she even doing here?; Miriam (Susan Ruttan), an addled ex-reporter at a Weekly World News type publication; the requisite slasher movie sex couple Connie (Susan Barnes) and Ed (Louis Giambalvo), but the only difference is they’re both middle-aged for no reason; and Ralph (Dean Cameron, who I’m suddenly rocking a major 80’s crush on), a self-harmer with a  cynical sense of humor. 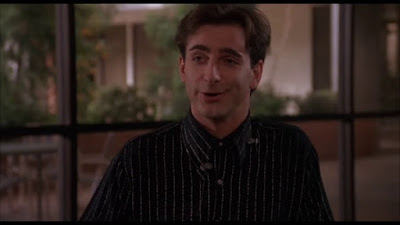 The most interesting element Bad Dreams brings to the table is the inclusion of the cult subplot. Although its hardly smart enough to really mine the psyche of a cult escapee (hell, Unbreakable Kimmy Schmidt does a better job) or even that of a coma patient’s culture shock waking up in a different time, the cult itself is divinely creepy. I mean come on, the film literally opens with women and children being set on fire! Richard Lynch is a reliably creepy presence, hiding his malice beneath a too-thin veneer of pure love, and capturing the emotional whiplash of a cult brainwasher.

Of course, this all pretty much goes to waste, because nobody had any pretentions about being anything but Elm Street fan fiction. Luckily, in terms of that angle, Bad Dreams is at least passable. The deaths are toothless as a newborn babe, but at least the supernatural goings-on allow them to pirouette around the MPAA, providing scenes that are mildly eerie and impactful, if not particularly gory.

Naturally, the film also fails to follow through on the idea that mental institutions are as much a cult as Unity Fields, but hey. Dean Cameron gets a couple good self-mutilations scenes with scalpels, so it all evens out. 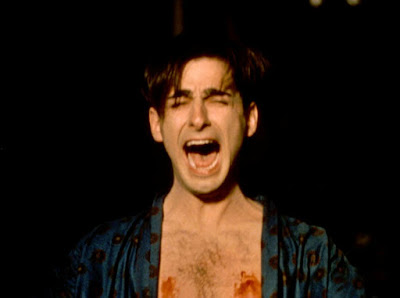 God, I should be put in jail for this blog.

I think we’ve established that Bad Dreams is lethally stupid, and the jumbled, reality-warping third act does it no favors. But at the every least, it is presented with a basic level of cinematic competence that was tragically rare in 1988. Naturally, it’s all cannibalized from other, better films (like the shot where Harris’ face slowly fades into frame like Michal Myers in Halloween), but it’s at least enough to maintain a basic level of attention.

Really, at the end of the day, generic is much better than bad, so Bad Dreams passes with flying colors. The cast is above average, the action is visible, and the plot is mildly interesting. If this were a summer blockbuster, it would be bottom of the barrel, but on the sliding scale of Census Bloodbath it’s a breath of fresh air.

Killer: [The deaths were mostly suicides or accidents, but they were influenced by Dr. Barrisford (Harris Yulin)]
Final Girl: Cynthia (Jennifer Rubin)
Best Kill: Connie and Ed are chopped up in an air turbine and their blood and guts come pouring from the overhead vents.
Sign of the Times: One of the cultists is wearing a headband and overalls with no shirt.
Scariest Moment: A patient silently gesticulates her distress at a doctor who’s looking the other way.
Weirdest Moment: “Sweet Child O’ Mine” plays over the closing credits.
Champion Dialogue: “That man’s a candidate for shock therapy. A jumper cable right up his ass.”
Body Count: 7; not including the cult engulfed in flames.
TL;DR: Bad Dreams is passable, despite being a transparently obvious Dream Warriors rip-off.
Rating: 6/10
Word Count: 1083
Also sprach Brennan at 8:53 AM