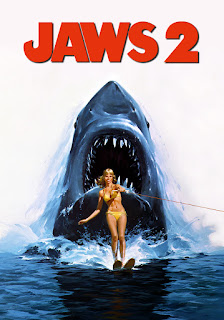 Jaws was bigger than any movie that ever came before it. It splashed onto the cinema scene like a 400-pound Great White shark, and the only surprising thing about the fact that it got a sequel was that it took them three years to make it. One good thing about this is that it allowed Italy time to crank out Orca: the Killer Whale, in which a whale devours a Great White in a show of aquatic horror supremacy (more on that in a bit). The bad thing is, they don’t seem to have spent those three years developing a shark animatronic that would actually work properly. 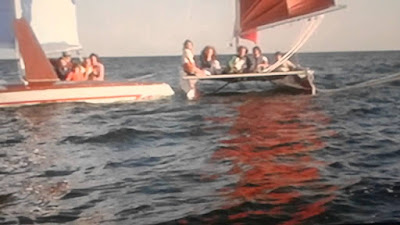 Bruce Jr. is carrying on the family name of being a massive disappointment.

One thing Jaws 2 has going for it is the return of a lot of the core cast and locations from the original: We pick up off the coast of Amity Island, where two scuba divers are attacked by a Great White shark, which we know more because of the John Williams score than the actual special effects. Chief Brody (Roy Scheider) isn’t alarmed at first, but a sudden spike in disappearances and accidents (including a beached Orca with a huge chunk bitten out of it – zing!) leads him to believe that Amity is once again under siege by a giant shark. Lord knows how he got re-elected, but once again the Mayor (Murray Hamilton) intercedes with his attempts to shut down the beaches on the account of some visiting investors.

This is how Brody’s son Michael (Mark Gruner), now a sexy teen, ends up on an ill-fated sailing expedition with a gaggle of his sexy teen peers and his little brother Sean (Marc Gilpin), who appears to be the exact same age as he was three years ago, eve though Mike has apparently accelerated through puberty like a regular Jack. Time is weird.

Anyway, Brody finds himself in the position of singlehandedly saving his sons and their friends from the ministrations of a ravenous, very pissed-off shark. 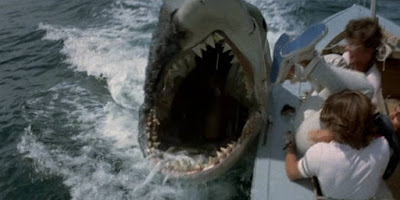 Also, it got its face burned in an explosion, because it was almost the 80’s, so SOMETHING had to explode.

You know that thing that happens in the credits of movies where, after the names of the main stars appear, they’ll save time by showing a block of eight to ten names of the lesser actors? There are no fewer than two of those blocks in the opening of Jaws 2, and that speaks to what is perhaps its biggest flaw. The film has already speared as many Jaws actors as possible into returning (including the guy who played Screaming Swimmer and the lady who asked “Are you going to close the beaches”) and yet it still feels the need to cram in a baker’s dozen of horny teens, only four or five of which get any semblance of a personality or even an introduction. 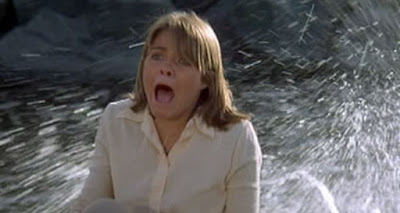 Although, let’s give a warm Census Bloodbath shoutout to Donna Wilkes of 1980’s Schizoid!

There is more to Jaws 2 than the uncomfortable marriage of small town drama and teen horror, but precious little more. While Chief Brody does the old “man who cried shark” soft shoe, he finds himself at the receiving end of some mildly amusing dialogue, and the devastated townsfolk are for the most part well-acted. It’s not a slog to sit through, and if you bob along with your brain turned off, you will make it through to the end just fine.

That’s far from strong praise, but it’s the best I can do. Unlike its titular sea beast, Jaws 2 is pretty toothless. It drops any and all pretense of actually being a horror film (though it does keep the faux-grindhouse ending that cuts to credits with brutal efficiency the second the threat is vanquished), and that tonally flat presentation mauls any sense of tension.

Of course, it doesn’t help that the shark menacing this film’s shores looks downright terrible. Even with the added crutch of a scorch mark across the shark’s face, it rings incredibly false, all emotionless rubber and endlessly gnashing teeth. Unfortunately, director Jeannot Szwarc (of the similarly lauded Supergirl) is no Steven Spielberg, and he flails when he tries to walk the tightrope of suggestion: trying to imply the beast’s size and strength without actually showing it requires an actual vision.

The shark might as well be played by an oven mitt with googly eyes, but the alternative is worse. The shots of people thrashing about in the water are much too wide, exposing the fact that, unless the shark is nibbling on their toes, there’s actually no way a fish that huge is touching the person in the shot. It’s all just desperate artifice without a solid story to hold it all together. 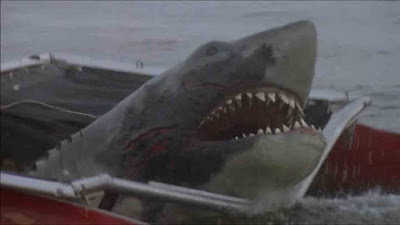 And the villain looks more like a hot dog with teeth than a shark.

Jaws 2 certainly isn’t the worst sequel in the world. At least it’s faithful to the universe it takes place in and the characters who live there (the same could not be said for the likes of the abominable Exorcist II: The Heretic, released just one year prior). Unfortunately, it’s a charmless waste of time. I know Spielberg makes everything look easy, but you wouldn’t think it’d be such a challenge to make a big budget shark attack movie into something that’s actually fun to watch.