Christmas In July: Round Yon Victim Mother And Child 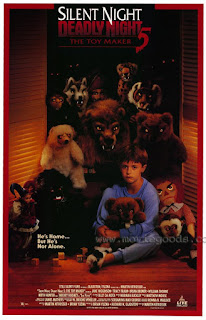 As we continue our July event of pretending that it’s not so hot outside that your steak cooks itself while you’re walking home from the store, we also reach a very important point in the Silent Night, Deadly Night franchise: the end. We're not finished -we still have the remake to look forward to with a mixture of vague optimism and extreme suspicion - but the contiguous franchise ends here in 1991 with Silent Night, Deadly Night V: The Toy Maker, only 7 years after the original controversial flick hit theaters.

To quickly recap, Part IV: Initiation obliterated the series’ already senile continuity by presenting a story with no killer Santa that wasn’t even obviously set on Christmas. But it hardly matters, because the series hasn’t had a rating above the 5/10 line since Part 2, and that one was most just recut footage of the much better original. We’re barely looking at a Sorority House Massacre quality average.

Although The Toy Maker is – pretty predictably – a stinker, it does feel a little more like a traditional Silent Night, Deadly Night film. The plot actually centers on Christmas and holiday-related activities, there’s a clip from the previous movie haphazardly sandwiched in (this time, it’s Silent Night, Deadly Night-ception as the TV plays the clip from Part 4 where Clint Howard is watching a clip from Part 3 – stop the world, I wanna get off), and the talent both behind and in front of the camera is startlingly overqualified.

No, I’m not talking about Clint Howard and Neith Hunter, who cameo as characters with the same names as their Part 4 counterparts, as if anyone was actually enough of a fan of that movie to be excited. I’m talking director Martin Kitrosser, Quentin Tarantino’s go-to script supervisor. I’m talking effects shaman Screaming Mad George, back for a second helping. I’m talking f**king Mickey goddamn Rooney! 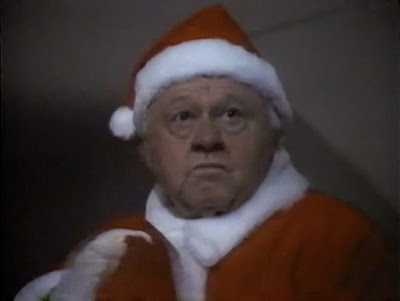 What is even happening at this point?

So, the plot, shall we? Young Derek (William Thorne) loses his father when a wrapped present that arrives on the stoop turns out to be an evil killer toy, this franchise’s answer to the popularity of Puptpermaster, but accomplished more cheaply (which is saying something). He is traumatized and goes mute, while his mother Sarah (Jane Higginson) attempts to deal with her grief and coax him into talking with various Christmas-related surprises, unaware of how her husband actually died.

Then there’s the roughly 900 splinter plots birthed from their story. Noah (Tracy Fraim) is a department store Santa who we see tinkering with nefarious Christmas goodies in his motel room, goodies that can be seen terrorizing neighborhood children. He is also snooping on the local toy store, Petto’s. That name is supposed to be a pun on the name “Gepetto,” but I only ever heard it as “Pedo’s,” which was mildly alarming. He owner of the shop is Joe Petto (why, Mickey Rooney, why?), a friend of Sarah’s. He has a teen son named Pino (Brian Bremer of Pumpkinhead), who never does anything explicitly bad, but always seems to lurk creepily around the edges of the frame, talking in a nasal whine like he’s Buster Bluth or something. 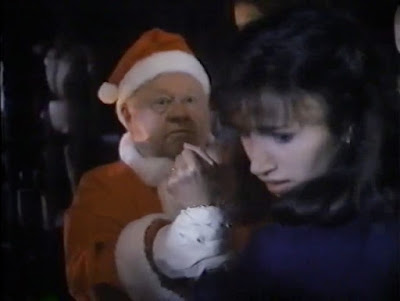 But seriously, Mickey Rooney is in this. I’m not playing around here.

The one truly valuable thing about SNDN 5 is that it’s quite firmly established in the 90’s (Derek’s best friend dresses like he got oversized hand-me-downs from his older brother. And his older brother is Shaq.), but it still manages to capture the lunatic 80’s high concept spirit of films like Puppetmaster or Halloween III: Season of the Witch. It’s a rare thing to find a film so genuine and sincere in the era of waning slasher rip-offs, angsty vampires, and winking post-Scream know-it-alls, so let’s take a moment to appreciate that.

OK, moment over. This movie sucks. It’s a cheap direct-to-video crock that overpromises and underdelivers. Its weird affinity to Part 4 (cemented by some shared cast and crew) just means that they’re reheating the leftovers, and everything good about that dish was already pretty bland. Part 5 continues that film’s theme of slathering screeching music over totally banal sequences in the hopes that you might be too distracted by a date (or these days, a phone) to notice that nothing remotely scary is actually happening. This movie is another thin, useless lump carelessly slapped together by everyone but Screaming Mad George.

And he really must have been screaming mad, because he’s given fart-all to do here. Although his effects are still the best part of the movie, they look plasticky and cheap, through no fault of their own. This is what happens when you’re asked to bring kids’ toys to life. It’s a hazard of the job (although there’s no excuse for a shoddy, halfhearted, larger piece that shows up in the third act).

There’s at least a shred of creativity here (an evil Santa doll with a revolving head that plays Jingle Bells until it switches to a fanged face and blares a funeral march is by far my favorite thing in the movie), but these scenes are far more slashery than the MPAA-deceiving body horror of Part 4, and as such have the bajeezus cut out of them. Every last drop of blood is sponged from this movie, so as an effects showcase there’s no way these crummy dime store monstrosities can hold a Citronella candle to the dripping insect nightmare appendages that torture Neith Hunter in Initiation. 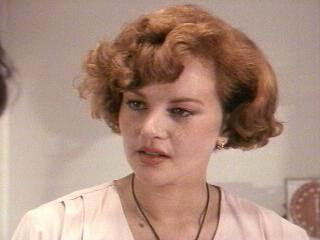 But her performance is back to torture us, so that’s cool, I guess.

The performances are more nondescript than Part 4, which I suppose makes them better, and Mickey Rooney at least instills an endearing warmth into the film in his opening scene (he never manages to shed his palpable discomfort when he’s asked to be sinister in any way, shape, or form). But it’s not like anybody could have performed this dialogue well. Sarah and a nurse share a Room-esque greeting, two teens are forced through a sausage grinder of unpronounceable slang, and the material crumbles form everyone’s mouths like mothballs.

The one thing I can cling to is that, especially in the third act, things get real weird in an invigorating burst of camp. The film inexplicably careens into soap opera melodrama and psychosexual absurdism, dragging its million disparate plot points into a miasma of aborted twists, fascinating sex scenes that defy physics and logic, and a charming lack of self-awareness. This reaches a shrieking crescendo with a reveal that can be predicted from the first frame of the film, yet is carried out in the most batsh*t way imaginable. And then the film abruptly ends at an arbitrary point, just like last time.

[HIGHLIGHT FOR SPOILERS: I didn’t want to spoil any of the delicious, gooey weirdness on tap here, but screw it. Who’s ever gonna watch this film anyway? This movie ends with a sitcom-style warm smile when Derek asks who the strange man who saved their lives is. This man is his real father, a reveal treated with the bizarrely sincere under-reaction of “kids say the darndest things, don’t they?”]

Anyway, Silent Night, Deadly Night V: The Toy Maker isn’t the worst of the bunch, but that’s hardly cause for celebration. This movie can’t match the dizzy heights of Part 4, and that one was a steaming turd. It’s no wonder that after this, the franchise didn’t see the light of day until 2012.