Some quick reviews of 2018 movies I've been catching up on, now that I have to wait until discount day to pay money for them instead of just swiping MoviePass like a shopping montage in an 80's movie.

Fantastic Beasts: The Crimes of Grindelwald 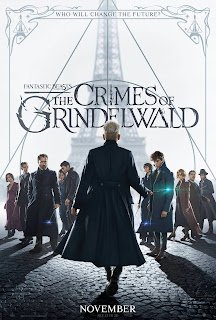 
Newt Scamander & Co. have a series of adventures while the evil wizard Grindelwald gathers his forces, and maybe they'll do something interesting in the next one.

Now, nobody is pretending that any spinoff franchise could ever be as huge a phenomenon as Harry Potter. Even though the films in that franchise could be pretty patchy, there's no denying their huge cultural impact, pushed into the stratosphere by the world-rending book series they were based on. I'm not asking Fantastic Beasts or its mush-mouth titled sequel to be anything close to that. I am asking for it to have the slightest vestige of quality, however. Unfortunately, you can't always get what you want.

From the title on down, Fantastic Beasts: The Crimes of Grindelwald is a miscalculation of biblical proportions. It's visually illegible, constantly plastering plasticky CGI across its choppily edited, mud-colored frame, but that's nothing compared to how illegible the script is. Its incoherent attempts at fan service (they shoehorn in every Harry Potter figure who might conceivably have been alive at the time, but their comings and goings blend in with the sheer mass of new characters we meet who get lost in dead-end plot lines or appear without warning as if they've been here the entire time) tumble over a plot that not only forgets to include very many magical creatures, but also bungles every single lead character from the previous movie, even though it made egregiously major retcons to include two of them in the first place.

The plot gets so unnecessarily complicated that a character literally has to sit us down for ten full minutes to give a flashback-aided presentation about what the hell we've even been watching this whole time, right before a climax that introduces about a half dozen different conflicts that haven't had a scrap of setup.

Rowling can't even resist doubling down on the single worst aspect of the single film: the reveal that the Americans call Muggles No-Maj's. As in, they have no magic. I like the idea that different wizarding communities have different slang terms just like the real world, but it's probably the laziest fake word I've ever heard in a world in which fake words are literally the backbone. Enter Grindelwald, which introduces other terms like the French "non-magique" and the term "can't-spells."  Is she just trolling me at this point? By film 5 in this franchise (yeah, that's the plan, but we'll see if they get there after this trainwreck), are we going to learn that the Australian wizards call them "have-to-throw-shrimp-on-the-barbies-cuz-they-bad-at-wandz"?

Any way you slice it, it's just a mess. Everything good about the first film, which was only OK to begin with, had been left to rot. The fun frolicking with magical creatures is present in small pockets of the film, but it all feels very Looney Tunes and it actively fails to gel with the movie's bizarre choice to focus on the brewing conflict that seems to be leading to Magic World War I. And Eddie Redmayne, who was a charming presence in the first film, is giving a performance that forgets most of his quirks and tics in favor of a stern locked jaw and staring off into space. The plot never really makes a space for him (the plot is much more focused on Dumbledore - who is barely in the film - and Grindelwald - who is in far too much of the film, and spends too much time bragging that he knows something we don't, which when revealed turns out to be a very lame thing), and he's content to just be the wallpaper anyway.

There are quite a few Harry Potter movies that I don't like very much, but I never expected to hate one of these. Well, there's a first time for everything. 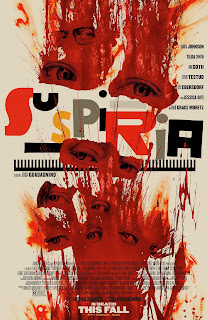 
A young woman joins a modern dance school in 1977 Germany that may or may not be definitely run by witches.

One way to put me instantly on your movie's bad side is to split it into chapters. Suspiria announces right away that it's going to have six acts, which means I'll constantly be checking in and going "we're still only on act two? Why isn't this movie over yet!" My impatience aside, Suspiria really revels in how drawn-out the whole process is. Two and a half hours of Suspiria is waaaay too much Suspiria. The original is 92 minutes long, the perfect amount of time to be completely rattled and shaken up before the film dumps you on the cold concrete.

However, horror films often can't sustain tension for much longer than that, not that this Suspiria seems particularly concerned with building tension anyway. It's another exercise in style like the previous film (to that end, I do think Guadagnino was the best choice to fill Argento's shoes), and in these elements it works pretty damn well. The set design is impressively austere and the cinematography wickedly echoes the original film by being its complete aesthetic opposite, entirely on purpose. And my favorite element here is the jagged sound design, which layers dialogue from other scenes over odd shots where it doesn't seem to belong, evoking the ethereal and odd sound dubbing of older Italian filmmaking. But where Argento's Suspiria served form at the expense of function, Guadagnino liberally ladles his style over a six-course meal of plot that makes the table groan under its weight.

The most obvious misstep here is the inclusion of the political turmoil in 1977 Germany, as if the location and time period of the original actually had a single thing to do with anything. It's a choice that paints Guadagnino into a corner and this material only ever feels clumsily shoehorned in. Less so the stuff about dealing with the lingering specter of the Holocaust, but it still intersects with the main thrust of the movie so little that you only ever feel like you're being dragged away from where the real action is. 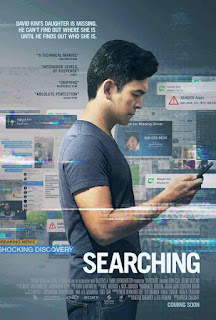 
A desperate father uses his computer to solve the mystery of his daughter's disappearance.

I missed Searching in theaters because of the aforementioned Great MoviePass Implosion of 2018, but I also wasn't feeling too motivated to go check it out because of a pretty petty reason. People were staring awestruck at this movie because it shows a whole story over a computer screen. As if Unfriended wasn't sitting right there, having done the exact same thing four years ago. And that wasn't even the first, because we have The Den, and presumably some other film that The Den was ripping off. Nothing is original, my friends. I'm just rankled that the discourse ignored the teenybopper horror film because that's what discourse likes to do.

And when it comes down to brass tacks, that teenybopper horror film is much more honest with its conceit. Searching is a fun movie with a gripping plot, but it's also a cheater. We cut between multiple screens (including just a straight-up TV), we get video footage of John Cho at all times because he leaves FaceTime open like a crazy person, we have actual non-diegetic music plastered over the big moments, and we get close-ups of all the important material onscreen because audiences can't be trusted to pay attention. Unfriended may be a sillier movie, but it's true to its format and I want to make sure it gets that respect.

That said, it's not like Searching is bad. On the contrary, it's a quite delightful little film. It's a muscular, pared-down thriller that - like most thrillers - stumbles a bit in its third act, but takes you on a wild roller coaster ride just the same. It also utilizes real social media and apps like Venmo, Facebook, Tumblr, and the like in a way that isn't just product placement like a Ralph Breaks the Internet, but rather a reminder that this is the fabric of what a teenager does all day. It highlights just how much of our lives are splayed out across the Internet for any enterprising viewer to piece together, and it's an excellent, chilling reminder of just how public most of our lives have become.

Unfortunately, as a two-hander between John Cho and Debra Messing, it's less than thrilling. Cho is good here, as he is pretty much anywhere, but neither quite has the presence or gravitas to sell the ridiculous twists that come swinging for the fences in the later portions of the film. But at any rate, they're absorbing enough that you do forget entirely that you're just watching a computer screen, and that's a recipe for a fun night on the couch with Redbox, even if it's not going to change your life.