Popcorn Kernels: Dumping Out The Net

In which we briefly review two movies produced for Netflix, and one that feels like it absolutely could have been. 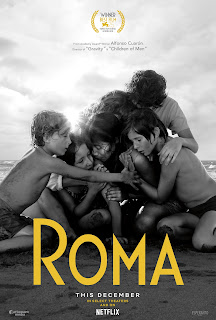 Now, I'm gonna front load this one so you know I don't only watch Hallmark garbage. Roma is a frontrunner for Oscar season, because really what else even looks remotely watchable this year? This movie sees celebrated Mexican filmmaker Alfonso Cuarón return to his roots, having taken five years to recover from his Earth-shattering, cinema tech-redefining hit Gravity. Roma seems small compared to anything, but especially that. And the crew is pared down too. For this semi-autobiographical piece, Cuarón not only wrote, directed, and produced, but he also shot and edited the damn thing. It's definitely a labor of love and it shows.

Loosely based on the life of Cuarón's beloved nanny, Roma is one of those walk-a-mile-in-my-shoes movies that depicts the everyday life of someone who popular audiences might not have thought about before: a working woman who has just barely escaped poverty and must live constantly under the shadow of people who are freer and more privileged while. It's full of mundane tasks and chores (the way dog poop piles up in the driveway might seem tedious, but sooner or later the sight of it will strike pure terror into your heart), but it builds to grand crescendos of emotion that are captured in those little routine, familiar actions. It's not a question of if this movie will make you cry, it's how many times.

It's a tender paean to the importance of every single life, especially in the way Cleo is weaved into the tapestry of Mexican political unrest of the 70's. She's not necessarily consciously participating, but she's an essential thread just like everybody else around her. But enough with the story (which is great). Roma is a cornea-crushingly beautiful movie. Cuarón knows how to frame a f**king shot, and he uses his patented technique of uninterrupted takes to draw you inexorably into the center of a world that feels entirely real, tactile, and occasionally entirely overwhelming.

There's a lot to devour in the imagery of Roma, so I don't know if I would say it peaked early, but one shot I would like to highlight - and in my eyes it is certainly the single best shot of the film - runs beneath the opening credits. I hesitate to even spoil the image, but what seems at first boring and menial transitions suddenly into a breathtaking display that is at once small, quiet, and profound.

And that sound design. The man knows ears just as well as eyes. The first thing that knocked me out about Gravity was the fully realized sonic world that swallowed you whole, and Cuarón treats the vistas of Mexico City and its environs with all the spectacle and wonder of outer space. Honestly, the whole film is a perfectly sumptuous sensory experience, which makes perfect sense why it's going to be viewed on... millions of people's laptops?

Thank you so much Netflix for making this movie, but seriously, f**k you. 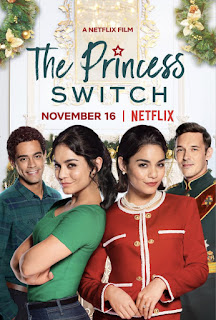 
A duchess trades places with a Chicago baker so they can experience each other's lives on Christmas.

Netflix really plumbed a new niche last holiday season when they learned that there is a ravenous audience for crappy Hallmark-level Christmas films, and this year they've pumped out even more of the things. I'd hesitate to say The Princess Switch is the most notable, considering there's a sequel to the smash hit A Christmas Prince and a movie where Kurt Russell plays Santa, but this is the only one where Vanessa Hudgens from High School Musical plays two characters, so which did you think I would watch?

The Princess Switch does exactly what it says on the tin. It's a predictable but charming plot that's not quite good enough to actually recommend, and not quite bad enough to have a great time mocking, but exists somewhere in between being generally sweet. It's like eating a single Hershey's kiss. It'll give you that little kick of sugar, but it'll just make you hungrier for a more substantial treat.

And while I wouldn't say Hudgens is giving a tour de force performance, her distinction between the two characters is always entirely clear, to the point that I imagined Vanessa Hudgens the baker as the lead and the duchess character as being played by somebody entirely different. Though that might be due to the fact that, as a wish fulfillment fantasy, the movie couldn't give half a f**k about how the duchess is liking her normal life, and spends about two and a half seconds with her every other scene. Probing character study this is not.

Plus, while it's not as relentlessly mockable as some of these other Netflix titles, there's still plenty of cheerily dumb gems lying around to be picked up and dusted off. Like the fact that "getting the coats" and "doing the dishes" are treated as two tasks that take the exact same amount of time. Or that the fictional land of Belgravia consists of one castle, one orphanage (complete with mistletoe for some despicable reason), one arts and crafts Christmas fair, and a huge corporate TV studio. Or the prince having a "meeting with Spain." Or the fact that they literally sit down to watch A Christmas Prince on Netflix at one point (scrolling right past A Christmas Inheritance, which is clearly madness). OK, maybe I love this movie. 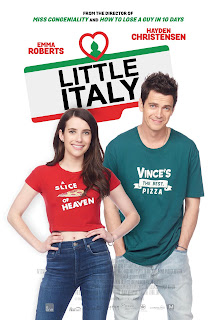 
Two hot young things fall in love despite their families being the owners of rival pizza places.

While Little Italy clearly is a branch of the cheesy (pun absolutely intended) family of Hallmark and Netflix original rom-coms, there is one thing I did not expect it to be, and the only thing about it that's unpredictable in any respect: It's also a rip-off of My Big Fat Greek Wedding. There are a lot of clues. For one thing, it's about how a big loud ethnic family can interfere with a modern love life. For another, they literally cast Andrea Martin, whose race is a mystery to Hollywood (she's Armenian by the way) and has played family members from all across the Mediterranean.

Like The Princess Switch, Little Italy has its share of fun dumb moments (I've even got myself a Champion Dialogue: "Best friends gotta eat, right?") that are delightful to rib. But unlike the former, this movie also has a grab bag of jokes that are offensive to just about every minority group on the planet, including Italians. There are two Indian side characters, which would normally be a sign of increasing diversity in a film, but they can not stop making jokes about curry powder, Jai Ho, and magic carpet rides (Aladdin was Arabian, first of all. Second of all, please stop.) At least those two aren't paired off in the end as the display of heteronormative race-matched pair-bonding that these types of comedies can't resist. Tragically, the same can't be said about the film's only gay character (a man who inappropriately gropes his straight friend), who instantly falls in love with the only other Gay in the room, a man who has swished onscreen only about thirty seconds before.

At least the central couple is racially diverse, because while Hayden Christensen is attempting his best, broadest Brooklyn Italian accent (strange, because this film is specifically set in Toronto), Emma Roberts attempts nothing at all. She doesn't even manage to convince us that she's capable of eating pizza, let alone having chemistry with Anakin Skywalker. It's a lazy, slapdash couple for a lazy, slapdash movie (it literally opens and closes with a "nunya" joke) and the only reason it exists is that the director also made Mystic Pizza, so he's got himself a Roberts family connection and people were like "sure, he did it once, we're Hollywood and we love doing things all over again!"

It's all a boring, unpleasant slog that is only redeemed by Andrea Martin who is of course terrific anywhere you put her, and Geri Hall in a one-scene role as a cop who has the hots for Christensen. It's the oldest, creakiest character archetype in the book, and it's definitely a bit more Me Too-y than the producers were probably hoping for, but Hall has an actual sense of comic timing and she manages to squeeze a lot of charisma out of a few lines. So at least there's something? But I'm sure one can find that scene on YouTube, and there's no use digging it out of a 102 minute movie whose single selling point on the DVD cover is that is features the hit Shawn Mendes song "There's Nothing Holdin' Me Back."