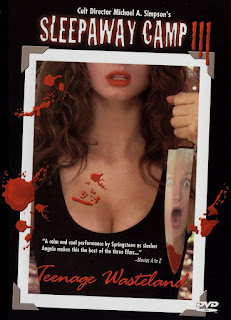 As you may recall, I enjoyed Sleepaway Camp II: Unhappy Campers, but only reluctantly given how it skated by on a bare bones, unembellished recitation of the slasher formula. Considering that that movie and its sequel were both filmed in the same six week period on the same sets with the same crew and lead actress, it’s truly mind-boggling how much of a vast improvement Sleepaway Camp III: Teenage Wasteland turns out to be. I guess practice makes perfect, even if that practice is merely the first three weeks of what must have been a pretty fun shoot. 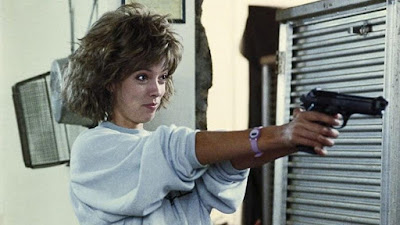 Except for those poor people who had to clean up a month’s worth of Karo syrup.

Like all good slashers, Sleepaway Camp III opens with a murder. Everyone’s favorite wickedly peppy camper killer Angela (Pamela Springsteen) murders and takes the place of Maria (Kashina Kessler), who was on her way to Camp New Horizons. An “experiment in sharing” that will pair underprivileged inner-city youths with rich kids from around the country, New Horizons was opened on the site of the Camp Rolling Hills massacre that took place a year (AKA three weeks) prior. The camp is owned by a couple named after The Munsters – the lascivious Herman (Michael J. Pollard of American Gothic, but also Bonnie and Clyde!) and the lazy Lilly (Sandra Dorsey) – who ostensibly want to bring two cultures together but are quite transparently scamming government funds to go on a tropical vacation.

Let’s not pretend there’s any more “plot” to get through and Meet the Meat, because there’s a hell of a lot of them. Representing the inner cities are: Tony (Mark Oliver, who played “Boss,” in The Boss, so I guess he’s technically the title character?), a profoundly sexy Latino from East L.A.; A-rab (Jill Terashita of Night of the Demons), a profoundly sexy leather-clad punk girl; Snowboy (Kyle Holman), a bottle blonde douchebag who’s so addicted to graffiti that he spray paints everything that isn’t nailed down – and everything that is; and Riff (Daryl Wilcher), who’s obsessed with rap music, insofar as this movie’s idea of “rap” is “license-free synth instrumentals with light scatting.”

And on the rich snobs side we have: Marcia (Tracy Griffith, Melanie Griffith’s half-sister and the third consecutive celebrity sibling to have a prominent role in this franchise), who is so thoroughly bland she has to be the Final Girl, though she has a genuinely sweet romance with Tony; Bobby (Haynes Brooke), a sweetly nerdy Judge Reinhold type who’s always up for a little bondage play; Cindy (Kim Wall), a mousy girl whose shyness hides a deep well of seething racism; and Jan (Stacie Lambert), the obligatory hot girl who inexplicably wants to sleep with the gross camp owner. 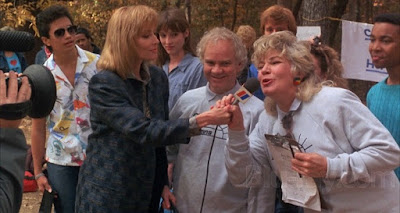 You may have noted that the rich kids are named after the Brady Bunch and the poor kids were named after West Side Story. This is either because the screenwriter simply didn’t know as many names as this massive platter of Meat received, or he wanted to engage your brain in some way other than the plot, because that certainly wasn’t gonna do it. Here’s all 80 minutes in a nutshell: the campers play trust games, then Angela kills them. Bada bing, bada bom. Oh, and one of the counselors is officer Barney (Cliff Brand), the father of Hot Sean (a camper who was murdered in the previous film – what a rich mythology we’re building here).

The only thing notably about the kills-only plot is that it’s much more structurally dynamic than the episodic slashings of Unhappy Campers. Our meat is divided into three digestible groups of five that Angela splits her time between in what amounts to a series of vignettes. This gives us time to familiarize ourselves with the characters and their one distinguishing trait before their untimely demise. It’s not rocket science, but the flow is smooth as butter and the interpersonal conflicts stand out clearer among the din.

Perhaps something as simple as a comprehensible structure is a small compliment to pay to a film, but when you’re grading on the scale of Unhappy Campers, this is a skyscraping leap in quality. But that’s not the only improvement Teenage Wasteland has to offer. The post-Freddy quips awkwardly shoehorned into Angela’s mouth are likewise much sharper and clearer. This time they’re actually relevant to some element of the character or the kill (probably because we actually have a sense of who any of these people are), and one or two actually made me laugh out loud (although the best line comes from Marcia in her closing scene, when she delivers a stupendously well-timed joke), which not even Freddy can do most of the time. 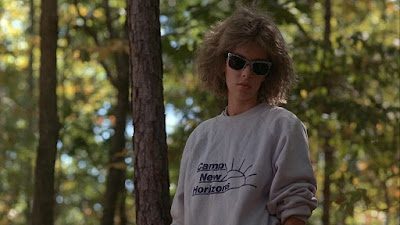 Angela is ready for prime time!

The kills here are also delightful. They’re not necessarily an improvement, and there’s no gore gag so epically memorable as Sean’s papier-mâché beheading, but they’re again more appropriate to the characters and setting. The preposterous kills are what propel both movies into to the lower tier of the slasher pantheon, but Teenage Wasteland’s grace notes (like Angela roasting marshmallows over a camper’s burning corpse) propel it forward just a smidge more.

Really, the refrain I’m noticing here is that Teenage Wasteland is actually consistent. That doesn’t make it a great film or even a particularly good one (never forget how poorly lit and staged these movies are), but if Unhappy Campers was raw and unpretentious enough to earn respect from hardcore slasher fans, then Teenage Wasteland surpasses that mark by actually giving a crap. Both are unusually watchable for direct-to-video horror, but Part III - as much as the story behind its production should make this impossible - has learned from the failures of its predecessor to deliver a satisfying chunk of gooey 80’s cheese.