Census Bloodbath: You're It 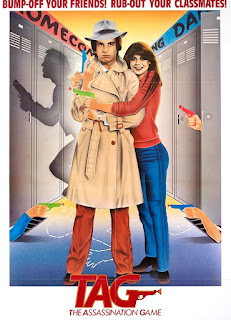 Tag: The Assassination Game wasn't always on the list of 1982 movies I was planning to cover for Census Bloodbath. I came across it in my initial research, but it just didn't seem like it had enough elements to count as a slasher. Plus, take a look at that poster. This movie was heavily sold as an Animal House-style sex comedy, to the point that even I was almost fooled. However, when I finally took a look at it, it proved to me that it deserved a spot on this list. It's not a good one, but it's a slasher movie alright. 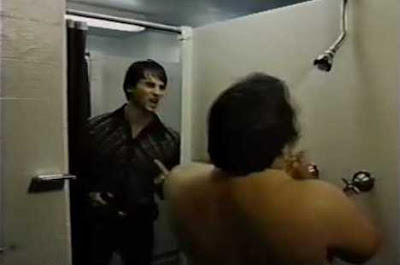 At the very least, I didn't waste my time watching a movie I wasn't even going to review.

OK, as much as it does count by my parameters, Tag still isn't particularly faithful to the tropes of the slasher, which had already been set in stone by this point. The plot revolves around a game of tag where a bunch of college run around shooting each other with dart guns. One night, student reporter Alex Marsh (Robert Carradine of Revenge of the Nerds) is hanging out in his dorm when committed player Susan Swayze (Linda Hamilton of... Linda Hamilton) slips through the door to use it as a hideout. He is instantly smitten and tags along with her under the pretense of writing a human interest story about the game.

What he doesn't realize is that the most interesting human in this game is Loren Gersh (introducing Bruce Abbott of Re-Animator and Bad Dreams), a five time champion who is so committed to winning that he has started using bullets instead of rubber darts. So about halfway through, this finally becomes a serial killer movie. Unfortunately he's using a gun because 1) slasher movies are always more interesting with a variety of edged weapons and 2) yikes, gun on campus stories have not aged well. Anyway, while Susan and Alex live out a noir-tinged flirtation, the missing persons reports are stacking up on the desk at campus administration. 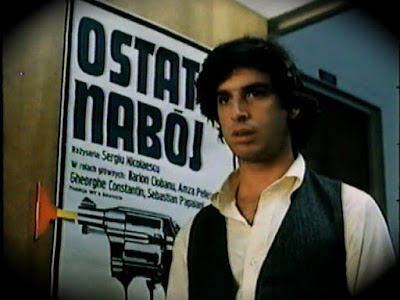 A story Alex's editor urges him to track down, which he absolutely refuses to do until it's almost too late.

Tag is a production stacked top to bottom with recognizable names. We've already seen three of them in the synopsis above, but some of the smaller roles are filled out by Xander Berkeley, Michael Winslow, and even Forest F**king Whitaker. Plus, it was written and directed by Nick Castle, who played The Shape in Halloween. It's slasher royalty directing a cadre of 80's royalty, and it goes horribly, horribly wrong almost immediately.

It's hard to pinpoint exactly where Tag goes wrong, but I'll do my darnedest. I guess a good place to start is the opening credits, a bizarre, poorly executed James Bond parody that promises a movie more in line with what those misleading posters are trying to sell. This wacky, cartoonish quality peeps from behind the curtain from time to time, but never enough that the movie actually commits to being a quirky comedy. There are some genuinely funny moments, like a scene of Gersh disposing of a body, where a woman is in the background talking to her dad about a dude getting her pregnant, or the flock of people rushing the gym when Alex announces there's a free Grateful Dead concert while trying to get somebody off Susan's tail. Or not funny moments that are clearly at least trying to be, like the list of Tag players that includes entries like "E. Presley" and "A. Neuman."

This tone completely fails to gel with the horror elements which are already silly and malnourished, but take themselves quite seriously. Bruce Abbott is solid as a man so obsessed with winning that he's completely relaxed his grip on sanity or morality (I especially love the phone calls he makes to the game master after each kill, where the man encourages him to keep going, not realize he's actually been ending these people's lives), but the game is so ridiculous and complicated in its execution that it's hard to follow what his goals even are in any given scene. And the fact that there is a real game going on makes the first act an exhausting slog through endless fakeout assassination scenes. 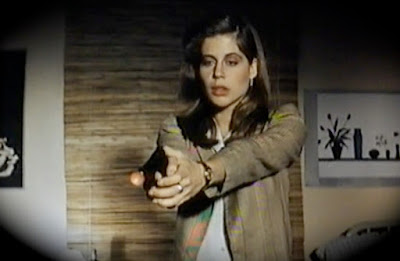 At least it afforded Linda Hamilton a chance to prep her Sarah Conner routine.

One interesting thing about the film is that it's very much inspired by the narrative and aesthetic elements of film noir. This is the third tone that completely fails to match the others, so much so that I literally couldn't find an appropriate place to mention it until now. The absolute best way this concept is executed is in Susan's introduction to Alex, where she is lit up by a flashing light outside his blinds, sending harsh rectangles of light slanting across her form in the only shot in the movie that comes even close to being exquisite.

The worst is probably the fact they thought they could get away with including the whole "you know how to whistle, don't you?" scene from To Have and Have Not verbatim. As a whole, this element is the most thoroughly achieved, with enough high key lighting and over-the-top production design to keep the feeling going throughout. But try as Nick Castle might, he's still making a movie where not every scene manages to avoid having the boom mic poke down from the top of the screen. It's a valiant effort, but it needs a little more delicacy to balance everything it wants to be.

It's not a total waste of time. Some of the shots that aren't too enshrouded in shadow to see anything are actually quite pretty. And obviously it's kind of a blast being surrounded by so many familiar faces slumming it with such a ludicrous concept. But being a fan of Terminator movies doesn't entirely carry over to watching Linda Hamilton play with a dart gun for 90 minutes. Maybe 20, at best.

Side Note I Didn't Have Room for Elsewhere in the Review: A hippie character has a pet rat perched on his shoulder, which he names Ratatouille, inventing Pixar in the process.

Killer: Loren Gersh (Bruce Abbott)
Final Girl: Susan Swayze (Linda Hamilton)
Best Kill: Gersh times his shooting of Nancy with the gunshot beginning a track race. He then pulls her crumpled body through the bleachers and it is disturbing.
Sign of the Times: A bunch of college students are very excited to attend a Grateful Dead concert.
Scariest Moment: Loren chases Susan through the music department, surrounded by the sound of clicking metronomes.
Weirdest Moment: The bodyguards of a particularly intense player (one of whom is Forest Whitaker) have a moment alone, and they mime getting into a car and driving down the hallway.
Champion Dialogue: "I haven't seen you this high since last June when you were hanging out with a communist."
Body Count: 5
TL;DR: Tag: The Assassination Game is a weird tonal mishmash that sometimes works but mostly doesn't.
Rating: 4/10
Word Count: 1225
Also sprach Brennan at 7:55 AM