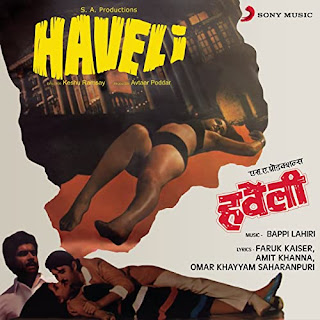 Year: 1985
Director: Keshu Ramsay
Cast: Rakesh Roshan, Marc Zuber, Aaloka
Run Time: 1 hour 59 minutes
Plot: Haveli follows an undercover policeman following four suspects of a string of murders to a luxury hotel in Goa, India.
Analysis: A Note: This movie was only available to me in unsubtitled Hindi, so obviously my review is to be taken with a grain of salt, though I have made a point of focusing only on visual styling, music, and slasher structure rather than plot or acting.
So, I haven't really found a place in my heart for the early slashers out of Bollywood, as much as I love Indian cinema in general. However, 1985 seems to be the year that they really pulled out all the stops, between Cheekh and Haveli. This entry hails from another member of the Ramsay family, Keshu, whose brothers Tulsi and Shyam previously collaborated on the largely underwhelming Sannata and Saboot.
He clearly saw what his brothers were doing and felt the same way that I did, because Haveli is the most focused, genuinely slasher-y entry that Bollywood has produced yet. For one thing, the killer is actually delivering kills at a consistent pace and wearing a mask the entire time, which seems like a low bar if you haven't seen as many Bollywood slashers as I have. But also the mask is fucking cool, showing a pale face frozen in a hawklike cry, something like a cross between a Japanese oni and the Bride of Frankenstein.
I wouldn't say there's anything particularly substantial about the kills themselves, but there is always something reasonably exciting happening in Haveli, and for an early '80s low budget slasher that's two hours long, that's no small feat. 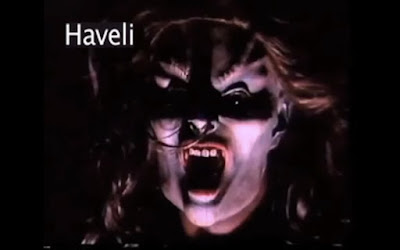 Killer: A Man (shocking)
Final Girl: Not applicable, or at least not really
Best Kill: This one guy is "hanged" for all intents and purposes, but the killer uses their own hands instead of a rope. It's a whole thing!
Sign of the Times: Teased hair on the beach seems like a great idea to me.
Scariest Moment: A man is in his car when the killer smashes the windshield.
Weirdest Moment: The film is randomly set at Christmas, and one musical sequence keeps zooming in on a random giant cutout of Santa Claus.
Champion Dialogue: N/A
Body Count: 8
TL;DR: Haveli is another solid slasher out of Bollywood from 1985.
Rating: 6/10
Word Count: 442
Also sprach Brennan at 7:53 AM