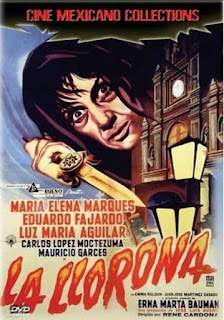 As far as I can tell, there was a pretty substantial gap between Llorona appearances in cinema after her auspicious debut in 1933. In fact, she wouldn't grace movie screens again until 27 years later, in another movie with the exact same title: 1960's La Llorona. It's also essentially a remake of the first film, or at the very least is structured very conspicuously in the exact same way. But like all remakes, this gives us a chance to look at the same story from two angles in two very different lenses, and isn't that literally the whole point we're doing this? 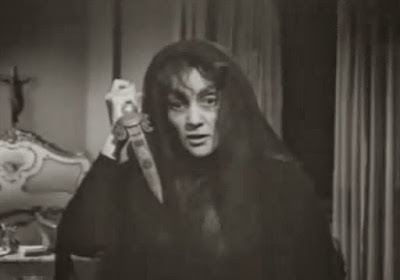 Not that there's a "point" to anything I do on this blog, but this one feels especially exciting for some reason.

In this iteration of La Llorona, a young couple - Margarita Montes (Luz María Aguilar) and Felipe Arnáiz (Mauricio Garcés) - gets married despite the protestations of Margarita's father Don Gerardo (Carlos López Moctezuma). When Margarita becomes unreasonably attached to their son Jorgito (Marina Banquells), never wanting to leave his side, Don Gerardo tells Felipe the legend of La Llorona and her curse upon his family.

La Llorona was once Luisa del Carmen (María Elena Marqués), a mixed race woman seduced by a Spanish settler named Don Nuño de Montes Claros (Eduardo Fajardo). He abandoned her for his Spanish fiancée, but not before leaving her with two children. She stabs them both in a rage (this is where we can most see how this is likely a remake of the 1933 film rather than a restaging of the same myth, because typically La Llorona drowns her children rather than stabbing them) and vows to kill the firstborn of all of his descendants before they turn five years old.

Wouldn't you know it, but the Arnáiz family gets a new nanny, and she looks an awful lot like this Llorona lady we were just talking about, and she doesn't seem to take the safety of the child very seriously... 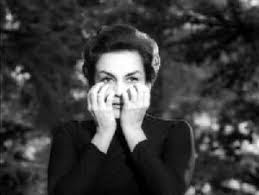 If Mary Poppins had eyes this steely, the Banks kids would have run in the opposite direction.

You might recall that the thing I loved the most about the 1933 La Llorona was the fact that it depicted the spirit as a sort of paranormal vengeance for indigenous Mexicans against their conquerors, and that political spirit is continued here. There is certainly less specifically indigenous iconography, but race is more freely and spiritedly discussed in the dialogue, and oh the dialogue is leaps and bounds ahead. 1960's Llorona brims with poetry, with certain scenes feeling almost Shakespearean in nature. It's even beautiful translated into English, and there are a handful of lines that definitely left me reeling through sheer stylization.

But that's not to say La Llorona isn't visually poetic as well. It generally wields a much stronger air of filmmaking competence (a couple scenes do drag - especially a honeymoon montage that is just wide shots of water sports that go on for what feels like 20 minutes - but the pace is otherwise swift and the shots don't cut off every performer at the hairline), but there are certain moments where the film springs to life.

I want to speak about one shot in particular, which takes place immediately after the death of La Llorona's children and before she is executed by an angry mob (a scene that itself overwhelms you with sheer excess, shrieking the existential horror of its own existence through its heightened soundscape). When the mob first catches wind of her misdeeds, they become one teeming mass of grasping clawlike hands whirling around her emotionless face. She remains calm and poised in the venomous afterglow of her murder, glamorous and wicked and horrible, and the shot in question is unspeakably gorgeous work that would have made any arthouse director of the time instantly jealous.

I will think about this shot for years to come. It's not the only strong work on the part of the cinematography but it's certainly the most striking, and a powerful argument for the existence of this film merely on its own merits. But there's a lot of other stuff to like too, how lucky we are!

The third act certainly can't bring itself to repeat the glorious, horrifying highs of the second, devolving into an almost cartoonish comedy of errors about La Llorona's repeated failed attempts to murder a child. But the thing is, I like this section almost as much, even if it's for totally different reasons. This is the stuff of pure melodrama, chock full of oversized reaction shots, extreme close-ups on crazed eyes, and cackling behind the backs of clueless parents.

Both of these acts are lifted entirely on the back of María Elena Marqués, who gives a performance that swings between effortlessly subtle (a prolonged shot where she transforms into an old hag is so quiet and understated you almost wouldn't even notice it until the very end) and pitched to the rafters (she's basically Wile E. Coyote in the end). This is perfect, because this film takes it upon itself to be much more of a psychological portrait than the previous entry. Sure, it gets lost down some avenues of paranormal mumbo jumbo, but this is a Llorona who was already flawed as a human. The primary new wrinkle here is that she detests her children because she blames them of the man who left, a man they can't help but remind her of. The film spends a lot more time with her than before, shading her as less of a stock hysterical female and more of an actual rounded character. Well, "rounded" for a character that is literally still the spiritual embodiment of perpetual female suffering.

In the end, I honestly don't think La Llorona feels like a single consistent piece. And I wish they had continued down the road of making it a tremendously affecting bit of emotional, artistic dread. But I'm certainly pleased with what I have instead. It's a fun, wild ride, and the best Llorona movie I've encountered so far. I hope we get a movie down the line that embodies everything I know this character can be, but until the moment we find it (if it ever comes), this is a perfectly acceptable substitute with a lot to love.

TL;DR: La Llorona is a tonally inconsistent film, but both of the tones it takes on are satisfying in their own way.
Rating: 7/10
Word Count: 1125
Also sprach Brennan at 8:16 AM